​Flags of the ASB

The ASB first felt the need to adopt a flag in 1878 upon the tenth anniversary of the first modern Parliament. The chief minister at the time, William Walker, had a flair for the dramatic and worked to establish the beginning of a Boreoamerican national identity. The turtle represents Hah-nu-nah, the Iroquois name for the mythical giant turtle on whose back the North American continent rests. The turtle had been used in government seals for some thirty years by then, but the flag was a much more visible public symbol of the confederation and its emerging nationhood. Green was chosen as the main color not just to represent the land, but also as a symbol of unity. Green was a color not associated with any of the major powers within the ASB, local or foreign. A number of state flags already used green in this way to represent neutrality or unity.

This is the set of flags I have designed, adapted and stolen for different parts of the confederation. (Click for full resolution.) 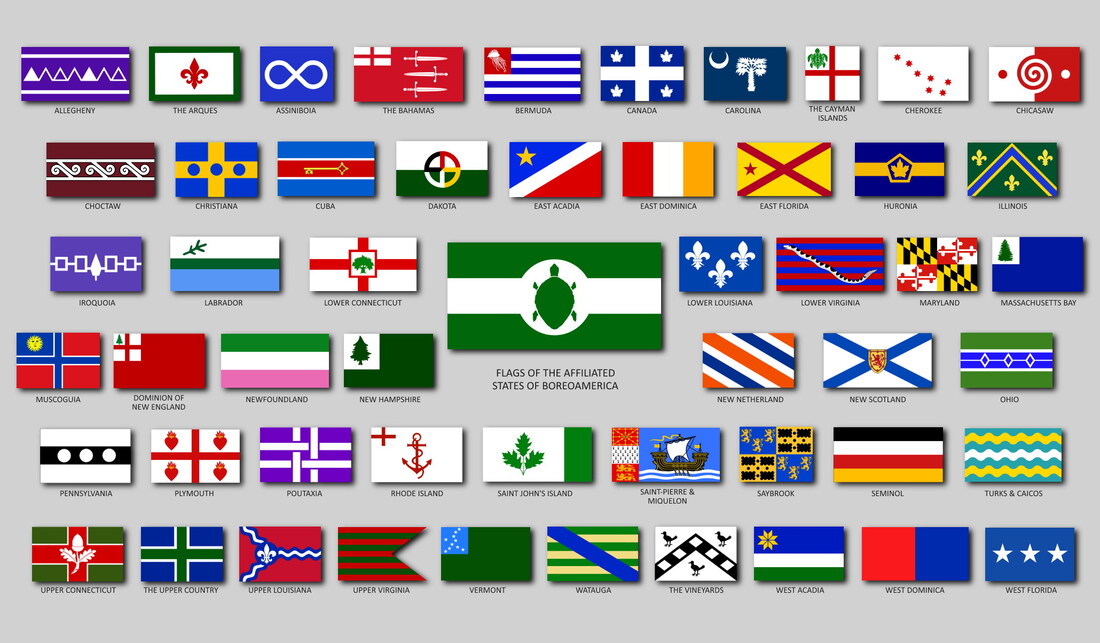 Color gives some hint to the history of some of the states. Red often represents England, blue France. Orange for the Netherlands can be seen in the New Netherland flag. The gold and red of East Florida and East Dominica come from flags used by Spain. The purple color represents wampum, and where it appears it symbolizes both Iroquois influence and friendship in general. Green has come to represent neutrality and the Confederation itself, since it was not associated with any of America's colonial powers.

Crosses are a common symbol on these flags. A red cross on white comes from England, and a white cross on blue comes from the old French merchant flag. Christiana's gold cross on white is based on the flag of Sweden. The many cross flags in the region probably influenced the design for Poutaxia, which features a cross in the colors of Iroquoia.

The colonial flag of New England, still used by the Dominion of New England, also provided the template for the three republican states: Vermont, New Hampshire, and Massachusetts Bay. It also influenced the old naval ensign of Virginia, which served as the basis for the flag of Bermuda. New England's square canton provided the design for the Cayman Islands.

Lower Virginia's striped flag is the origin of four other state flags, all of which were either once part of Virginia or influenced by it. Upper Virginia's green and white stripes come from a cavalry variant of the flag, while Bermuda's white and blue stripes, with a red canton, are from a naval variant. Bermuda also replaced the original rattlesnake with a local venomous creature, the Portuguese man o' war. Watauga's striped flag originates with a unit of Wataugan militia who fought under Virginian commanders; the blue diagonal comes from another militia flag. The Turks and Caicos flag, designed in the early twenty-first century, uses a striped design to recall its Virginian heritage.

The fleur-de-lis is associated with states formerly part of Louisiana. It had been the symbol of the French royalty, and when the colony of Louisiana declared independence following the French Revolution, it adopted the fleur-de-lis to represent its opposition to the new regime in Paris. Later it was seen to represent Louisiana and the French-speaking culture of the Mississippi valley more generally, and most of the states that resulted from its breakup use it in their flags. These include the Arques, Illinois, Lower Louisiana, and Upper Louisiana.

Heraldry is important in the designs of several state flags. Pennsylvania, Maryland, Saybrook, and the Vineyards simply fly the banners of arms of their founding proprietors. Christiana has a design that suggests the Penn arms. East Acadia's flag similarly suggests the arms of the Bonaparte family. The arms of three medieval European states - the Kingdom of Navarre, Duchy of Brittany, and Duchy of Normandy - appear in the flag of St. Pierre. Both New Scotland and Plymouth fly banners of the arms issued by their founding countries. Properly speaking, Rhode Island's anchor is not a coat of arms, but a heraldic badge used as a seal; and it also forms the main symbol on the flag. 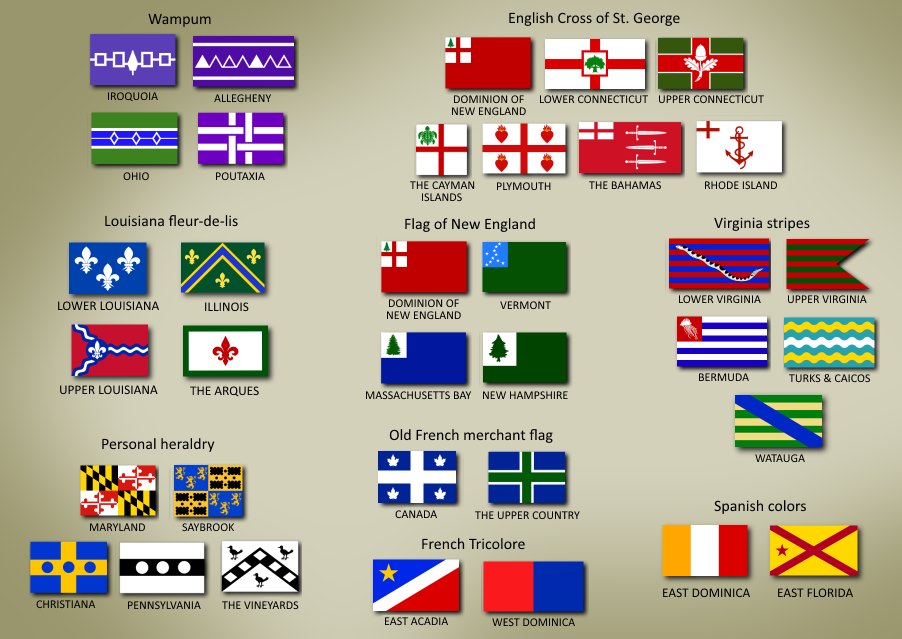