The Royal Province of Maryland 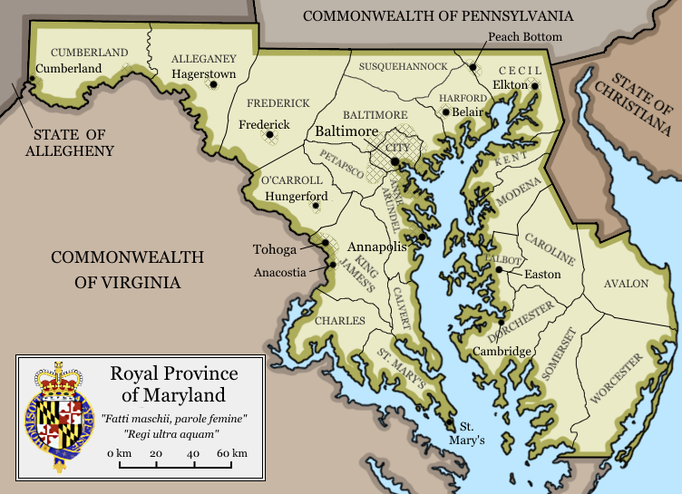 Maryland was founded by the Calverts, Barons Baltimore, a Catholic English family looking to establish a land where they could live out their manorial ambitions and profit from plantation farming. The colony grew under the benevolent but absolute rule of the Calverts, and the planation culture that took shape there resembled that of Virginia, only Catholic.

The colony's religion placed it in an awkward position within the British Empire. Tensions flared up repeatedly between the original Catholic colonists and Protestant newcomers. During the Civil War, power passed between partisans of the two confessions. Lord Baltimore managed to come out on top, welcoming the Stuart Restoration in England and expelling the Puritan interlopers from his restored colony.

However, political chaos continued to churn both the British Isles and their colonies. Less than thirty years after the Restoration, the empire was again torn apart by a conflict between king and parliament. This time, the reigning Calvert came out strongly in favor of the King James and the Jacobites, something to be expected of an English Catholic. He fled England for Maryland. All this provoked an open conflict with Virginia. Things looked dark for Calvert when Maryland's Protestants rose up to support Virginia and the Revolution. Maryland avoided occupation and annihilation by allying himself with the Shawnee and obtaining arms and loans from leading citizens of Pennsylvania. William Penn himself, who might have objected, was absent from America at the time. The war dragged on until 1691, when Virginia's underpaid militia began deserting in such numbers that the attack had to be called off.

Maryland in the 18th Century

Maryland's Jacobitism effectively destroyed the unity of the English colonial empire. It allowed Pennsylvania to declare its continuing neutrality in the conflict, which led to that colony's slow drift toward independence. The war with Virginia set a precedent for English colonists using Indian allies against one another, a practice that caused a great deal of bloodshed but that ultimately may have saved many native societies by guaranteeing them a place in the continent's political order.

By the middle of the 18th century Maryland also had a secure place in the continental order. Normal trade and cross-border migration was occurring with its neighbors. An alliance with the Iroquois to the north was one of the connecting bonds that led eventually to the emergence of the Confederation.

To this day the colony remains loyal to its absentee king. The Jacobite claimant, who lives in Italy, has more-or-less abandoned claims to the English and Scottish thrones, but acknowledges the minimal constitutional role he plays in Maryland. It has never been seen as appropriate for the King to live in Maryland - in the old days this would have looked like the start of a campaign to conquer all of Boreoamerica, while in more modern times it would look like an infringement of the liberty of Maryland and of the ASB more generally. But he does visit his little realm fairly often.

Besides the distant King, Maryland has a resident constitutional monarch, the Lord Proprietor, Earl of Baltimore. He performs most of the duties of a head of state, opening the General Assembly and lending a general sense of pomp and flair to the life of the province. The General Assembly is a unicameral parliamentary body. The title "Lord of the Manor" was used by wealthy Marylander families, and over the years the king has elevated most heads of these families to the rank of Baronet; but there was never a separate house of lords. The mere rumor that the Lord Proprietor was considering creating one was enough to provoke another Protestant uprising in 1715, which was only barely put down.  The Baronetcy of Maryland does meet as a body, but it has no constitutional role.

On the map can be seen the original capital, St. Mary's. The town was abandoned during the wars with Virginia and is today a minor settlement. Annapolis, the second capital, is located up the bay, and you can't miss the current capital, Baltimore, whose metro area has outgrown its official city boundaries and spread into neighboring counties. Other important towns are Tohoga and Anacostia on the Patomac, important suburbs of Alexandria, Virginia. Cumberland, in the extreme northwest, was an important point on the westward route for missionaries and settlers in the 18th and 19th centuries.