Haute-Louisiane is a former French colony on the Mississippi and Missouri Rivers. Saint-Louis is the urban hub for the entire middle Mississippi region.

The state today is overwhelmingly French-speaking. The bulk of the population has Louisiana Creole origins, with some influences from the Illinois Métis. The Mormons, concentrated in the western part of the state, have maintained their English language for the most part.  Some Spanish can also be heard, this being a border state.

The name Upper Louisiana was first applied to the French administration in Illinois, which had French settlements starting in the late 1600s and a permanent fort by 1720. The first French town west of the river was Sanite-Genevieve, founded in 1732. The community of Creoles, Canadians, and Osage traders remained small and dependent on the larger settlements across the river.

Upper Louisiana emerged as a territory distinct from Illinois with the founding of Saint-Louis in 1760. The city was to be a new center of trade and administration, one that would be more closely tied to the colonial government than the precocious Illinois. The colony that grew up to the west was much more a transplant of Lower Louisianan society than Illinois, which was developing a distinct Métis identity. New habitations and market towns appeared along the lower Missouri.

In the late 1790s Louisiana declared independence from France, mostly out of a desire to maintain its slave system when the French republic took steps toward reform. But this was an uncertain time for all the French states. Canada was left somewhat adrift, though it remained nominally loyal; and the French posts in between Canada and Louisiana tried to maintain their ties with both sides. In the war of 1802, Louisiana fought on the same side as France after Illinois and some other western settlements were attacked. After the war, Louisianan leaders were convinced to join the French imperial system as part of the new Kingdom of New France.

Upper Louisiana continued to grow. Some people came in from Illinois. Other newcomers included German settlers and a large number of Mormons, followers of a new religious sect fleeing persecution in New England.  The Mormons established many new towns along the Missouri; when final political boundaries were drawn they found themselves divided between four different jurisdictions: Haute-Louisiane, Arques, Dakota, and Mexico.  According to Mormon teaching, the region is sacred, and their town of New Enoch, on the Mexican side of the river, is said to be the place where Christ will return to Earth. Further up the river, Louisianan officials established a line of forts that became the nucleus of the state of Dakota.

During the imperial era, Upper Louisiana was finally granted a civil government, though still under a military governor. In 1833 the Kingdom of New France came to an end and Louisiana was again independent. Not much later, it negotiated its western boundary with the newly independent Mexico. This led to the creation of Middle Louisiana, the modern state of Arques, as a new province between Upper and Lower Louisiana. The borders of the provinces were defined and surveyed.

In the time when the ASB came together as a permanent confederation, Louisiana was a single republic. Each of its three provinces sent representatives to the Congress of the Nations, but in the Grand Council Louisianan leaders represented the state as a whole. It was only after 1860 that Upper Louisiana pursued statehood for itself. Soon after achieving it, the new state abolished slavery, spurred on largely by the German and Illinois populations. The importance of Saint-Louis as a port grew with the development of commercial farming to the north and west. Industry grew at the same time. 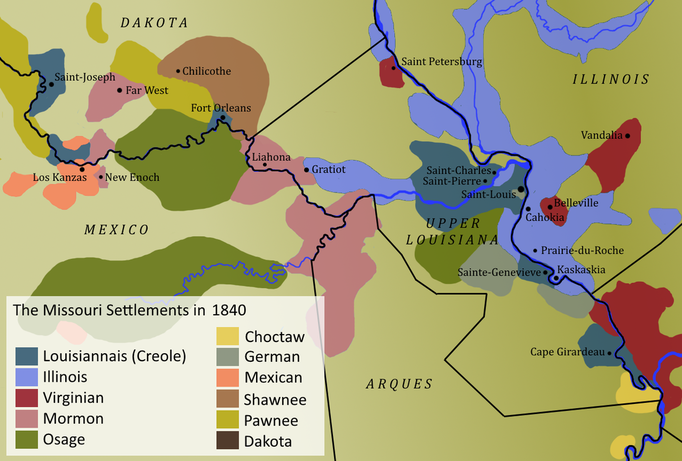