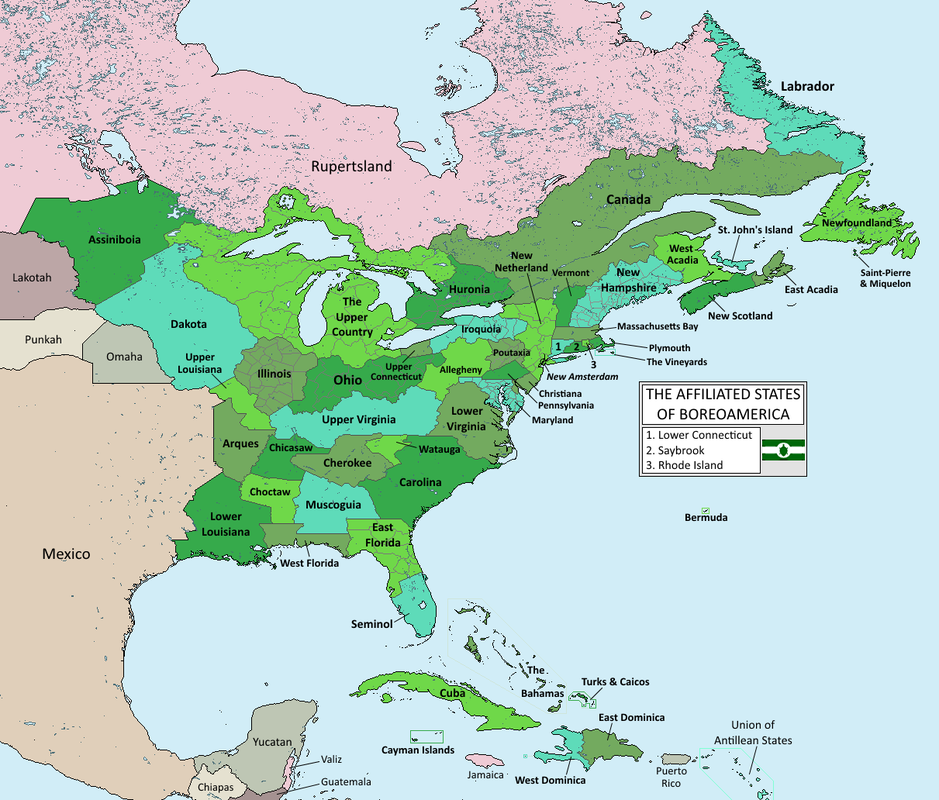 The ASB is a project to create an alternate version of North America. In the years since I started it, a lot of other people have contributed their own ideas, stories, and artwork. The main map, in fact, is mostly the work of alternatehistory.com's Gian, who has done a lot of cartography for the project.

The idea for it came from Richard White's history The Middle Ground. This remarkable book describes the world of the Great Lakes in the colonial era.  Around the Lakes, the notion of the Frontier, a dividing line between cultures, did not exist. Instead, colonists and Indians inhabited a shared world. The dominant social and political structures combined things European and indigenous.

The master plan of the ASB has been to take the world of the Middle Ground and extend it: to bring it forward in time to the present and further out in space to cover most of eastern North America. Along the way, I started tossing in anything from North American history and culture that I found interesting, exposing a few of the deep buried roots of our past.

The result is a world that has been called "utopian", and aspects of it certainly are. I certainly don't think that this realistically could have come about if things had gone differently in 1759 or 1665 or any other time. It's just a setting that I enjoy working on. So in that sense, while it looks a lot like Alternate History, strictly speaking that's not what the ASB is. That's why I chose the name: in the world of alternate history, ASB means "unrealistic" or "impossible". I want the setting to feel lifelike, but in terms of the historical events, realism is not the goal.

So what is the ASB?

The Affiliated States of Boreoamerica (pronounced "bor-EH-o-a-MER-i-ca") is a confederation of fifty-one states.  Some are former colonies, some are former indigenous chiefdoms, and others are mixed states created through the cooperation of Europeans and Indians.
﻿
Where did it come from?

It arose gradually from the alliances that began in colonial times. The predecessors of the ASB were the different interlocking alliances between imperial powers and local nations. The Indians of the Great Lakes were linked to New France as the Children of Onontio; New Netherland, Iroquoia, and some of the smaller tribes of the Alleghenies were bound in the Covenant Chain; while the same tribes often met with the English colonies in a series of Congresses.

The system of alliances gave rise to a few permanent institutions for mediating disputes. The states formed an increasingly dense network of relationships. ​Little by little, these relationships and institutions came to be regarded as different bodies of a single confederation. It's a little  like the European Institutions in our world.

In its modern form, the ASB emerged in the middle of the nineteenth century. During that era, the European powers lost control of most of their colonies and stopped directly governing those that remained. The elected institutions of the ASB, namely Parliament, slowly assumed some of the powers of a government. The individual states surrendered some of their sovereign powers, above all the power to wage war. Before the 19th century was over, the ASB had become something like a sovereign country.

How does it work?

The ASB is a patchwork of states with very different systems of government - to the point where a few former colonies have remained monarchies while most have not. Some states have presidential systems; others have adopted Westminster-style parliaments. The states that evolved from Native chiefdoms and Métis alliances have their own distinct political traditions to add still more variety.

The ASB as a whole is governed by Parliament. Representation is by state delegation; apportionment among the states is based on population.  Parliament selects the Chief Minister, who is the head of government. Parliament also chooses the Grand Council of State, a body that acts as the collective "Head of State", via a system designed to select mostly uncontroversial consensus figures that represent as many states as possible. The Grand Council in turn chooses its own President, who also acts as foreign minister. This separation of the foreign ministry from the parliamentary Government gives the ASB's foreign policy an apolitical character with a strong inclination toward nonintervention and neutrality.

Where is the capital?

For the first few decades of its existence, the ASB had no capital. Congresses and parliaments met in various places. Over time, the commercial center of New Amsterdam became the most common location for these meetings. As Parliament and the Grand Council became permanent institutions, they naturally settled on the city as their permanent site. This was made official when New Amsterdam donated land for confederal buildings.

New Amsterdam was attractive for both its location, its neutrality, and its economic importance. It is located exactly in the center of what are called the Central States: the line of mostly small, wealthy states that were the backbone of the ASB's economy in its early years and to some extent today. As a coastal port, the city was accessible to the confederation's island members, and through the Hudson, Mohawk and Champlain valleys it had good access to the interior states. Its advantageous location and freewheeling commercial culture made it the busiest trading city on the continent, and it was convenient for the confederal institutions to be close to all this activity.

In earlier versions, I had the capital at the city of Two Forts, at the site of our city of Pittsburgh. Some pages and maps still reflect this, and I am gradually changing them to correctly identify New Amsterdam as the capital.
On Journeys Through the States

On journeys through the States we start,
(Ay through the world, urged by these songs,
Sailing henceforth to every land, to every sea,)
We willing learners of all, teachers of all, and lovers of all.

We have watch'd the seasons dispensing themselves and passing on,
And have said, Why should not a man or woman do as much as the seasons, and effuse as much?

We dwell a while in every city and town,
We pass through Kanada, the North-east, the vast valley of the Mississippi, and the Southern States,
We confer on equal terms with each of the States,
We make trial of ourselves and invite men and women to hear,
We say to ourselves, Remember, fear not, be candid, promulge the body and the soul,
Dwell a while and pass on, be copious, temperate, chaste, magnetic,
And what you effuse may then return as the seasons return,
And may be just as much as the seasons.

Bibliography: A list of sources used to create the ASB