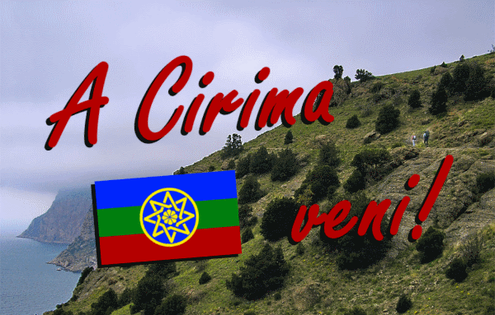 Crimea, the country where Parra is spoken as a trade language, is a large peninsula in the Black Sea.  Its climate is subtropical in the thin strip of southern coast, cool and fertile in the Crimean Mountains, and dry steppe in the large interior.

Crimea spent most of its history as a borderland.  The south was connected to the world of the
Mediterranean, the north to that of Central Asia.  It has become a real cultural stew of some twenty different major languages and four major religious branches (Muslim, Christian, Jewish, and Pagan).  It was the seat of an empire, the Crimean Khanate, for much of the Early Modern period.  Since 1918 it has been an independent republic.

The Crimea was settled by a diverse range of peoples from different parts of the Mediterranean basin and Central Asia.  Conquered by the Mongols in the 13th century, it later became the seat of the last splinter of the Mongol Empire, the Crimean Khanate.  The khanate dominated the interior of medieval Crimea, while Italian colonies ruled the coast.  This was the era that spawned Parra as a trade language.  The expansion of the Ottoman Turks erased the colonies and made the khanate a vassal state.  Later it came under Russian influence and was annexed in 1783.

The Russian Revolution of 1918 was more successful in Crimea than anywhere else in Europe, and for twenty years the country was independent as the Tauridian Socialist Republic. However, during the Second Great War it was occupied by Ukraine, Germany, and finally by Russia.  After the war, the Crimea remained an independent state only on paper, while it was ruled by a pro-Russian puppet government under the SNAC party. This government was overthrown in 1989.

For a much more complete version, see the History page.

Crimea's cultural landscape is one of the most complex in Europe.  Its location and geography are responsible for this diversity.  Crimea's link to Pontic and Mediterranean civilization brought seafaring peoples from the south: Greeks, Romaniotes, Italians, Armenians, Georgians, and Turks.  Through its link to the Eurasian steppes came many nomadic peoples: Scythians, Goths, Karaim, Tatars and Krymchaks, Mongols, Nogais, Roma, and finally Cossacks.  The Russian Empire was not able to drive out this diverse population, but it did try to encourage settlers to immigrate whom they believed would be cooperative subjects; this is how Russians, Ukrainians, Germans, Bulgarians, Estonians, and even a few Latvians and Romanians came to the Crimea.  The Circassians and Ashkenazi are in a different class; they came to Crimea to flee persecution elsewhere in the empire, knowing that here, the tsar's cruel ethnic policies were less strictly enforced.

For a more detailed description of the Crimea's cultural mix, see Population.

A description of some of Crimea's cities and their cultures and traditions is located on a subpage.

Crimea's national parliament is called the Rada.  Choosing a name for the legislature in 1989 posed something of a challenge, since nearly every available term carried some kind of cultural baggage.  Rada had been the name of the Ukrainian interwar legislature and was reinstated after 1989, and Crimea adopted this name.  It is ultimately a Germanic word, cognate with the modern German and Gothic word Rat.

The Rada is a unicameral body.  Naturally it is made up of dozens of timy parties representing a gamut of ethnic and ideological constituencies.  Most seats are chosen by proportional representation.  A few token seats are reserved for representatives of the traditional mileti, the communities. The idea was to ensure representation to the smaller minority groups and to appease the outgoing SNAC government.  Every government since the beginning of democracy has been a coalition.  SNAC, which ruled the country between 1948 and 1989, was not outlawed and continues to participate.

A local mayor is called a console.  This Parra term has been used officially since Soviet days.

Crimea's many communities have a long history of facing oppression of various kinds and taking care of their own members.  The authoritarian regime of the latter 20th century intensified this culture, and it remains a defining feature of Crimean politics today.  Crimeans expect their government to be corrupt and dysfunctional and have not yet fully adjusted to the idea of democratic rule, even after more than 20 years. 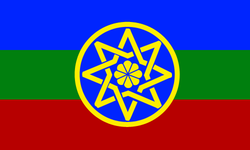 The octogram, Crimea's national symbol since 1989, comes from a gate at Mangup, a fortress built by Greeks and used by Goths and Turkic Kipchaks.[1] It has become Crimea's unifying national symbol, representing the idea of one land containing many cultures.  A form appears on the national flag.

The colors blue and red come from Crimea's flag under SNAC one-party rule, who more-or-less favored the Russians and used a flag in the Slavic colors, a blue-white-red tricolor.  The addition of green and gold colors represents diversity and prosperity. 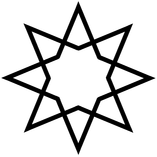 Tamgas are linear symbols in Turkic traditions that function in many ways as coats of arms.  They originally developed from cattle brands.  The octogram, simplified by the removal of the ring and flower, is the official tamga for Crimea.  It is an element in the country's seal and coat of arms.  It is used alone in certain contexts where a simple, linear symbol is better than a more elaborate one, such as the roundel of the Crimean Air Force or visa stamps used by the Immigration Office. 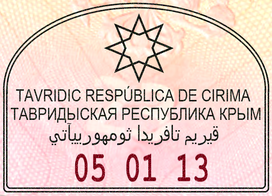 Crimea's currency since 1989 is the danar, a Parra word for money.  Parra is occasionally put to use in this way, as a neutral language that many different people can understand.  The danar is divided into 120 cepeci, a name that comes from the Russian kopek.

Like many countries formerly in the Snorist bloc, Crimea has struggled to orient itself in the world. It is often described as being pulled in three directions: westward toward Europe, northward toward Russia, and eastward toward Central Asia. Russia's geopolitical energy has focused on keeping its own disunited regions from straying too far, so pressure from that direction has not been particularly intense. Crimea's eastward orientation is represented by its membership in the Silk Road League, an organization largely of Turkic and Mongol-speaking states. It is mostly about culture and heritage, but it also spawned a free-trade alliance, the OASSA (Orta Azıyalıq Satu-Savda Avdanı). Crimea wavered for years over the issue of joining, but with pro-Western and pro-Russian factions unable to offer a more attractive alternative, the Tauridic Republic finally joined the OASS in 2015. This ties Crimea's economy closely to those of Turkey, Turkestan, the Moghul Realm, and Qazaqstan.