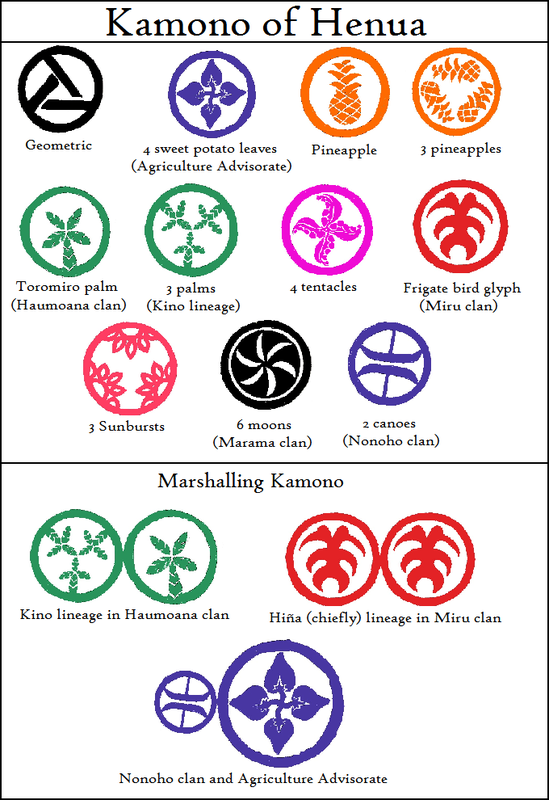 Henua, like many Pacific nations, has adopted the use of mon, the heraldic badges used in Japan.  Henua has made the system its own by adapting it to Henua aesthetics and family structure.  The Japanese language distinguishes between mon (any badge) and kamon (hereditary family badges); Arero Henua borrowed the latter term and calls all heraldic badges kamono, whether hereditary or not.

Henua has a three-tiered family structure: the seven mata, or clans, are the largest divisions.  Each clan has several lineages called ure, and the lineages are further divided into mohingo, families.  Kamono exist for all of these family groups.  Henua heraldry, therefore, has more in common with Japanese or Venedic heraldry, in which symbols are used by entire families, than with Western heraldry, in which arms are displayed by individuals.  Every clan and lineage has its own distinctive kamono.  Not every family, however, has one.  In addition, certain non-hereditary government offices have kamono, most notably the office of King, which uses a sooty tern, a symbol that also serves as the national arms.

Kamono take the form of geometric, plant, animal, astronomical, or artifact symbols displayed inside a circle.  Traditional petroglyphs and Ta Tuai glyphs (the old form of rongorongo) are also common.  The circle is a necssary component in Henua heraldry, whereas in Japan it is merely a common convention.  Indeed, the word kamono is used as a synonym for "round".  Many kamono feature rotational symmetry and repeated symbols, a feature adopted from Japan. As in Japan, kamono may be displayed in any color, but certain colors tend to be favored for certain symbols.  The royal badge is usually red or orange, and the palm badge of the Haumoana clan is most often colored green.

When a person wants to display the badge of his clan and lineage, both kamono can be used together.  This is another distinctive trait of Henua heraldry that some Western heraldists have termed marshalling, after the Western practice of placing the arms of husband and wife next to one another.  When a clan and lineage badge are marshalled together, the clan badge is placed on the right. The same pattern is used for displaying clan and family, or lineage and family - the symbol of larger family group is put on the right, that of the smaller family group on the left.  Displaying symbols for all three groups is usually considered overkill, but when it is done, the clan symbol is on the right, lineage in the middle, family on the left.  The chiefly lineage of each clan does not have its own distinct kamono, using only the badge of the clan.  Members of these lineages who want to emphasize their status may display the clan kamono twice.The king and government officers may display their hereditary kamono together with the kamono of their office.  When this is done, the office badge is shown as larger, usually twice the diameter of the hereditary badge or badges.  It is placed to the right of a single hereditary badge, or in the center of a marshalled display of clan, lineage, and/or family badges.

As Henua society is strictly patrilineal, married women use the kamono of their husbands' family groups.  The idea of a woman using her "maiden mon" would be unthinkable on Henua, since she no longer belongs to her father's family.

Lineages and families sometimes, but not always, have badges resembling that of their clan.  The various lineages of the Miru, for example, almost exclusively use frigate bird motifs, their famous totemic symbol. (The two-headed frigate bird on the clan kamono bears a close enough resemblance to the infamous "SNOR eagle"  of twentieth-century Russia that Miru are constantly having to explain to foreigners that they are not, in fact, Snorists.)  A common practice is for lineages to reduplicate their clan symbol.  The Kino lineage, for example, uses three palm trees, a single palm being the badge of its clan, Haumoana.

Like in Japan, the most common use of kamono is on formal clothing.  Traditional ceremonial garb is always embroidered, dyed, or printed with them.  Unlike in Japan, where one to five mon are placed on a robe depending on the formality of the garment, Henua clothing can use any number of badges.  Entire garments may be covered with them like a pattern.  Traditionally, houses also display carved kamono - most common that of the ure, or lineage - on or just inside the door.  The favored medium for carved kamono is stone, but wooden or even metal badges can also be found.  Like in Japan, kamono feature prominently in wedding decor, where they symbolize the wife casting off one family and joining another.  The tattoos so prevalent among Henua (at least, among the non-Christians) often incorporate the ure badge.  Kamono also appear on the hulls and sails of boats, on the sides of vehicles, on clan-operated wind turbines and other facilities - any place where family identification might be called for.

Henua's government regulates the use of kamono.  The post of Ariki Kamono - nearly the same phrase as the Western "king of arms" - has existed since the nineteenth century and is usually held by a government worker with an additional job.  The Ariki Kamono keeps a roll of arms, investigates complaints of heraldic fraud, and assigns new kamono to families that request them.  Immigrant families may apply for kamono and sometimes choose unconventional symbols, but they are not allowed to use symbols of foreign countries.  An example of this is the badge of the Ure Elene, which depicts a rub-el-hizb, a Quranic symbol, to highlight the family's Greek Muslim heritage.