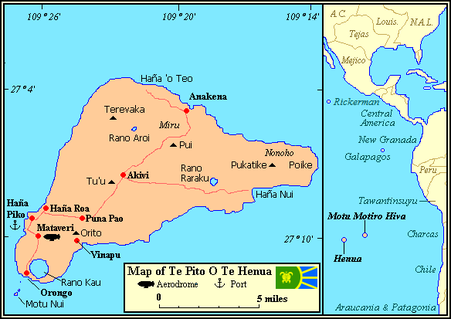 The Henua state consists of one main island, a few offshore rocks, the tiny islet of (Manu) Motu Motiro Hiva (called Isla de Sala y Gomez in Castilian) 260 miles to the east, and the archipelago of Ña Motu Roaroa Etoru (or las Islas de Juan Fernández) over a thousand miles beyond.  Nearly all of the inhabitants live on the main island.

Henua is one of the remotest inhabited places in the world: the nearest landmass, Pitcairn Island, is 1300 miles to the west, and the coast of Chile is 2200 miles to the east. Roaroa has a maritime border with Chile.  There are no other defined land or maritime boundaries with any nation.

The island is roughly triangular due to its formation by three volcanoes.  None are active anymore, but their craters are still prominent: Rano Kau, Rano Raraku, and Rano Aroi.  The island's population is most concentrated at the southwestern end, around the twin towns of Haña Roa and Haña Piko, and the associated villages of Mataveri, Puna Pao, and Vinapu.  The rest of the island is mainly farmland and protected forest.  The bulk of the forests are around Mount Terevaka at the island's northern vertex.

Henua has no geographic subdivisions; the seven clans provide the basis for administration when subdivisions are called for.  And while each clan has a home ahu, or shrine, along with some traditional territory, the clans themselves do not comprise geographical divisions.  The offshore islets, including Motu Motiro Hiva and Motu Nui, have special status and are considered royal property.  All of Henua's elections are at-large.

Being so remote, Henua has always claimed generous areas of ocean as territorial waters.  Currently it claims territoriality over waters within fifteen miles of the base shore lines of both of its islands.  Henua also claims an exclusive economic zone in the form of an ellipse with foci at Henua and Motu Motiro Hiva.  The ellipse extends to 250 miles beyond either island.  These claims have been tacitly recognized by Japan, which has certain long-standing treaty rights within Henua''s EEZ.  Chile, Charcas, Tawantinsuyu, Peru, and Castile have also been granted more limited rights within the EEZ, generally limited to scientific research and, in Chile's case, non-commercial fishing (excluding marine mammals and reptiles).

An ellipse of similar dimensions is claimed around the Roaroa islands to the east.  Off Roaroa, the Exclusive Economic Zones of Henua and Chile share a border, Henua's only border with another state.