The Pseudodemetrian Imperial Commonwealth is another alternate world project of mine.  Like the ASB, it takes a basic historical premise and runs with it.  And like the ASB, it is not supposed to be realistic.

The premise is a dynastic union between Russia, Poland, and Sweden in the seventeenth century.  The union aligned the interests of these three enemy powers, so that rather than constantly war against each other they were free to expand their empires in all directions.

The Commonwealth is divided into 38 separate "realms," theoretically independent states that are bound to each other in many different ways.  The realms range in size from enormous Russia, the de facto leader of the empire, to tiny St. Barts, a Swedish colony that remains very dependent on the mother country. Many of the realms are actually composites of smaller lands and states; when these are taken into account the entire empire is made up of 126 "constituent countries" speaking hundreds of languages and following ten different official religions, besides many minority faiths.

The name began as a joke: False Dmitriy, or Pseudo-demetrius, was a Polish aristocrat who briefly became Tsar of Russia in 1605 by pretending to be the dead son of Ivan the Terrible.  I use his name on some online forums. One time, on a thread about dynastic titles, I began to claim a long list of grandiose titles for my "False Dmitriy" persona.  The PIC came about when I began to wonder what it would be like to live in the vast empire that my titles conjured up.  It combines a "wank" (an alternate history in which one country has uninterrupted success) with the spirit of cooperation that animates my "ASB" project.

The origins of the dynastic union that came before the Imperial Commonwealth lie in the Time of Troubles in Russia. When nobody could agree who should be Tsar, a young Polish aristocrat appeared claiming to be the son of Ivan the Terrible. He amassed enough support to become Tsar himself. Dmitri brought with him a coterie of Polish retainers, but he also made alliances with key boyars and married the daughter of one of them. Thus the blending of nations that marks the PIC began in False Dmitri's court, with its combination of Polish and Russian elements.

Political union began later. I'll have to work out the details, but Dmitri went back to Poland to be elected as its king. The szlachta saw the benefits of having a king who was also Tsar. The allied forces of Poland and Russia could then turn against their mutual enemy, Sweden. What ended up happening was a dynastic alliance in which Sweden's Princess Christina married one of Dmitri's sons. Again through skillful politicking, the son of this union was able to win enough support among the Swedish nobles to be accepted as king. By some point in the second half 17th century, Sweden, Poland and Russia had a common monarch. All the energy that the three countries had devoted to fighting each other could now be turned outward.

Now in order to make all this work, the successive Pseudodemetrian tsars really did need to adopt a policy of live and let live to their different realms, especially to the nobility. At the same time, military victories abroad would have to keep the nobility invested in the ongoing success of the dynasty. Magnates from all three realms benefited from the conquest of Siberia and forays into Turkish territory. Their mutual support allowed Poland to take over Transylvania as a vassal state, and Sweden to strengthen its Baltic territories. By the later eighteenth century the ruling class was thoroughly committed to the cause of Empire. They provided generations of soldiers and bureaucrats to keep it running.

But a lot of the nascent PIC's expansion happened without direct conquest. This was no more true than in the Far East. Russia supported the rebellion of the Manchu banners against the Qing, and the Tsar came forward as Manchuria's new emperor. But this takeover was carefully framed as the rise of a new Chinese dynasty, dubbed the Jian (堅), not as a Russian colonial action. And indeed, while Russians took control of much of Manchuria's economy in the nineteenth century, its government remained wholly separate. The takeover of Korea via invasion and coup proceeded in much the same way, the kingdom declared a dominion of the Jian. The island of Ezochi (Hokkaido) was occupied and ruled as a colony, but responsibility for it passed from Russia to Korea in the twentieth century, and it became Jian territory. In this later period the Pseudodemetrians were not above using old dynastic tactics. Hawaii was brought into the empire first by flattering the king with a royal marriage, then forcing him to abdicate in favor of the tsar. A few of the western territories, most notably Pfalz-Zweibruecken, had been acquired in a remarkably similar fashion, with a cadet branch of the family ceding power to the tsar.

Social ties had helped bind together the older realms of the empire, and the same became true in the new realms of the Pacific Rim. The movement of peoples brought a common character to territories from China, to the Russian Far East, to Alaska and Oregon and the Russian-influenced parts of California, both the small official colony and states further inland. In all these places, people from East Asia lived side by side with Russian officials and emigrees, people from allied European states, and Russian minorities, especially Germans and Jews. Joining them were migrants from further east: Americans, especially English speakers but also some French. From their settlements in Oregon, they moved into Alaska and crossed the Pacific to the Asian realms. Sakhalin and the Maritime Province of eastern Manchuria have large English-speaking communities today. The Americans and Westerners helped to ensure that these Pacific realms did not slide into colonial status, but maintained robust, independent governments.

The Atlantic colonies, much smaller and less powerful, evolved rather differently. All of them survived only by joining themselves to larger federations in which the tsar and the European governments could play only a very limited role. Christiana became part of the ASB, Tobago and St. Barts members of the UAS, and Gambia a state of the CWA.

The sprawling empire evolved into the Imperial Commonwealth during the middle fifty years of the twentieth century. St. Petersburg, long the royal seat due to its position between the three realms, became the home of the United Parliament (or Soyedinyonnaya Duma). The parliament drew representatives from more and more of the countries of the empire as representation was extended to them. The PIC in its modern form was declared in the 1980s, when the formal principle of equality among the members was finally affirmed. 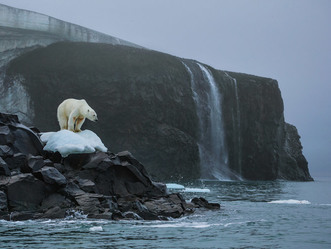 The extreme geographic points in the Pseudodemetrian Imperial Commonwealth give an idea of its vast spread.

Northernmost point: Augustus Island, Polar Island Territories (our Rudolf Island, Franz Josef Land). The island is an inhospitable frozen rock that has served as the base for many great expeditions to the Pole.  Located 81° 46' north of the Equator, it is one of the northernmost pieces of land on earth. 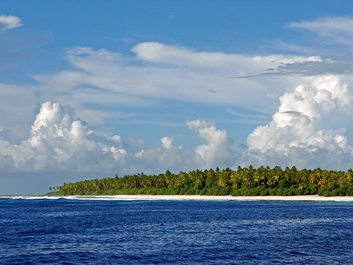 Southernmost point: Sharks Island, Polynesian Sporades, Kingdom of Hawaii (our Flint Island, Kiribati). The ten atolls of the Polynesian Sporades are the only territory of the PIC to reach south of the equator.  A couple of islands in the chain have been sold or annexed to other powers, but most of it was part of the Russian colony that today is the Kingdom of Hawaii. Sharks Island is an uninhabited atoll with few resources, in the words of a mid-20th century report, "of no value to anyone whatsoever." Attempts to use it for guano mining and coconut planting failed because of its extreme isolation. It is at 11° 25' south latitude. 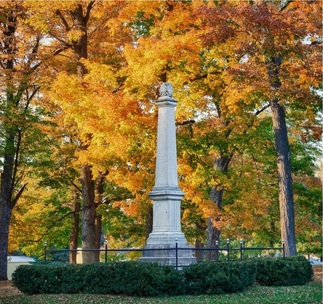 Westernmost* point: Millington, New Sweden (in our Maryland) - The town is at the source of the Chester River, which served as a point to mark the western vertex of the border between Maryland and New Sweden. It is a quiet, pleasant little place, very different from the unforgiving wildernesses that make up the rest of this list. The culture is almost 100% English speaking and closely tied to Maryland. A shady park with messages of goodwill in many languages marks the western limit of the Tsar's domains.  It is located at 75° 50' west of Greenwich. 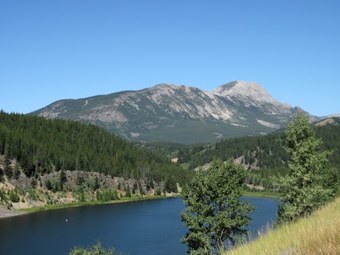 Easternmost* point: Crowsnest Pass, Oregon (on the border of our Alberta and British Columbia). A high pass through the mountains that in the past marked a boundary between Kutenai and Blackfoot territory, and today forms the border between Oregon and the Rupertian states. English- and French-speaking traders, miners, and railroaders came through the pass in the late 19th century and made it an important crossing point through the Rockies and an important link between the high prairies and the Pacific.  It became the eastern limit of Oregon, a vast territory that was a protectorate of the Russian Tsar (but never a colony).  It is 144° 41' west of Greenwich.

*By convention, the Atlantic is considered west and the Pacific east. 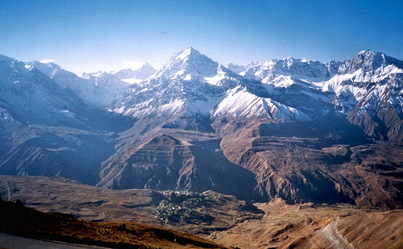 Highest point: Somoni Peak, Pamirs, Bactria (in our Tajikistan). This remote peak was not identified as the highest point in the empire until the 20th century.  A team of Russian, Swedish, and Bactrian mountaineers scaled it soon after that.  It is 7,495 meters above sea level. 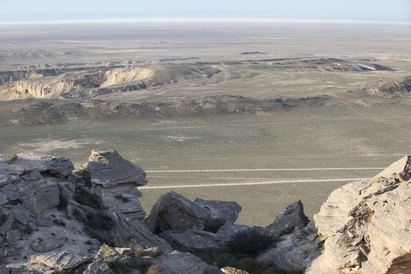 Lowest point: Karagiye Trench (the Black Jaw), Land of Ashgabat, Turkestan (in our Kazakhstan). The Black Jaw is a harsh, craggy cut in the earth near the edge of the Caspian Sea. At 132 meters below sea level, it is lowest dry point in the large, low-lying Caspian basin.