This page is for explaining some of the vocabulary used in the project.

For the main broad racial groups, I have consistently used the terms Black, White, and Indian. I find these to be the most durable and the least baggage-heavy that I could choose. They were current in the colonial era, and they are current now. The people of the ASB might use a variety of other racial terms, some polite, others not; but these are the standard ones. In more recent material, I find myself gravitating to the word indigenous more and more, especially when I'm trying to make a comparison between the societies of the ASB and our own Latin America.

I have introduced the term Mixed to refer to descendants of White and Indian people. It's just a translation of the French Métis and the Spanish Mestizo, and it is an important term in a world where the English were much more willing to engage in such mixing. In some places I've used the French or Spanish words instead, not very consistently.

I have also mostly been careful to use the word English instead of British when talking about the nation that founded most of the English-speaking colonies. The timeline isn't finished yet, but I know that in the world of the ASB, England and Scotland did not stay together. Some of the older pages on this site still refer incorrectly to "British" colonies.

The ASB as a whole is usually called a Confederation, and we often use the word Confederal to refer to the central government. But even this is not consistent, because a few states are also called  "Confederations," even if they are not confederal in structure. Calling the ASB a country or a nation can also create ambiguities: for one thing, many people do not think of the ASB as a single nation, but as a union of sovereign states; for another thing, both of those terms are also used at the state level! Some states call themselves Nations, and the Upper Country is not only thus called, but it is divided into more than twenty smaller units which are themselves called Countries or Constituent Countries.

In short, almost every political term in the ASB has multiple meanings depending on the context in which it's being used.

Often a state's identifier is a clue to its origins and history. States that call themselves Republics and Free States often had a violent revolution in their past. Most Provinces, by contrast, separated peacefully either from the mother country or from a larger state. Nations and Confederations were generally founded as Indian polities. States that were created via diplomatic compromise tend to be called States or use no identifier. The greatest variety of names can be found among the ASB's remaining monarchies, which use names from their respective traditions.

All together, the ASB has ten States, ten Provinces, seven Republics, four Commonwealths, three Nations, two Free States, two Confederations, a Realm, a Dominion, a Principality, a Captaincy-General, a Collectivity, and a Royal Province. Six of the ASB's members use no identifier in their official names. 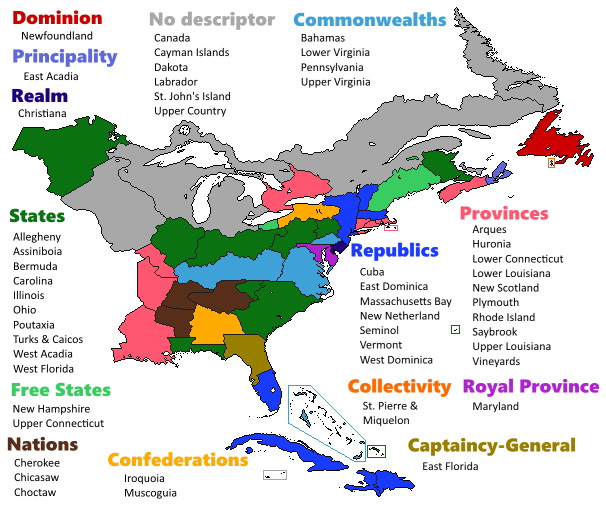