The English of the ASB

In our world, the English achieved complete demographic domination in North America.  While the Spanish and French empires had manpower problems for their entire histories, the English colonies drew swarms of settlers, and after immigrating they multiplied at an astounding rate.  English colonists in the late 18th century already were saying that it was inevitable that their  people would conquer the whole continent someday; looking at the numbers (and the outcome), they were probably right.

So one of the essential points of divergence between our world and the world of the ASB is that the number of English colonists was much lower.  Maybe the Civil Wars, even longer, more complex, and more disruptive than in our timeline, hurt commerce and stunted the colonial effort.  Maybe something happened in England to slow or halt the process of land enclosure.  Whatever the reason, the English population in the colonial era was a bit larger than the French, Spanish, and Indian populations, but not by all that much.  This meant that the English had to deal with their rivals rather than simply steamroll over them.  This demographic fact made the ASB confederation possible. 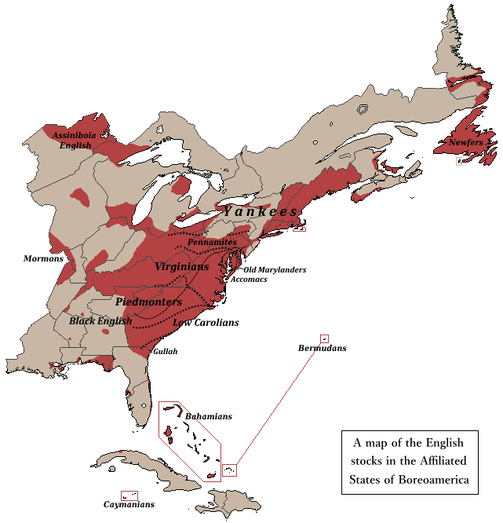 The English of the ASB have developed into multiple well rooted ethnic groups, traditionally known as stocks.  The six conventional colonial stocks are the Yankees, Pennamites, Virginians, Piedmonters, and Carolians, and Black English.  Both Piedmonters and Carolians hail from the state of Carolina.  The Black English are a large ethnic group whose original home stretches from Carolina to Maryland.

The major groups have spread well beyond the states from which they take their names, establishing distinct communities in such states as Ohio and the Upper Country.  Even transplanted, the English stocks have kept a sense of their own identity.  They acknowledge a common language but still see other stocks as being as different as the Canadians, Acadians, and Métis within the Francophone community.

Other distinct English ethnic groups include smaller cultures that have not spread as far, many of them based on islands.  These include Newfers, Bahamians. and the Gullah people of the Sea Islands in Carolina and East Florida.  In many cases, ethnicity is inconsistently defined.  Most Marylander English consider themselves to be of the same stock as the Virginians, and in Maryland the term "Waterman" is often heard for this Virginia/Maryland combination.  But outside the Chesapeake region, people with roots in the Chesapeake are usually just called "Virginian."  In addition, some recognize an "Old Marylander" stock consisting of English Catholics with deep roots in the province.  Another ambiguous group is the Mormons, a religious group prominent in Arques, Upper Louisiana, and Dakota.  The Mormons trace their ancestry largely from Yankee families, but their religious and physical isolation from other English has led many to consider them a separate ethnic community. 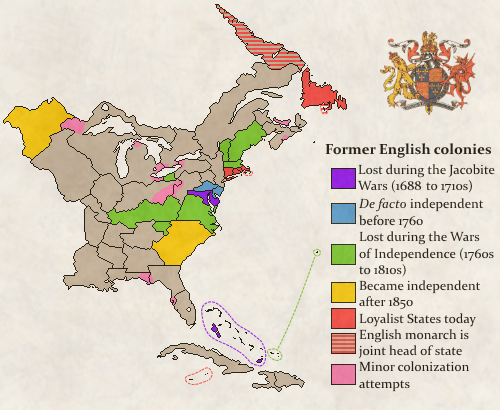 There was no Act of Union in this timeline, so it is proper to talk about English, rather than British, colonies.  In fact, the Union of the Crowns dissolved after the trauma of the Civil War and the Jacobite Wars.  It was during those same conflicts that England lost its first colonies, the Jacobite states of Maryland and the Bahamas.  Pennsylvania and its dependency of Christiana declared their neutrality in that conflict, used that declaration to avoid royal control, and essentially drifted to independence in the following years. Another wave of revolution resulted in independence for Virginia, Bermuda, and much of New England.  The state of Assiniboia was founded by England, but it did not take long for its Métis population to revolt.  Carolina entered the 20th century as a loyalist dominion but adopted a republican form of government later.  That leaves seven states of the ASB that stayed loyal to the English Crown: The five members of the Dominion of New England plus Newfoundland and the Cayman Islands.