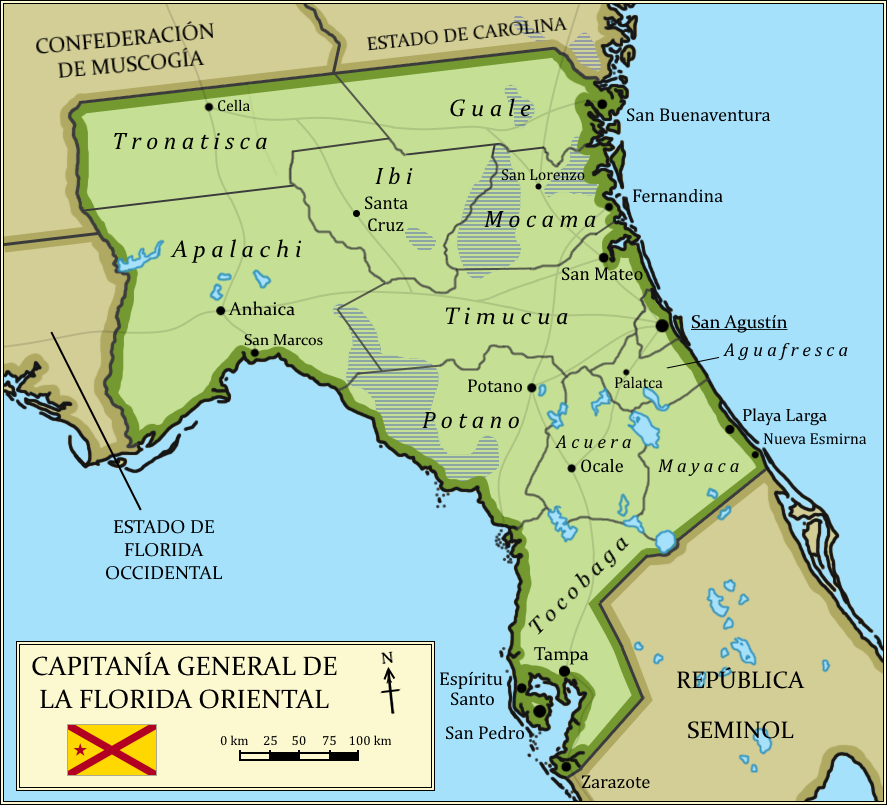 ﻿East Florida is the most thoroughly Spanish state on the ASB's mainland. Its culture has elements from Spain, Cuba, the Seminol, and local indigenous peoples, along with influence from the English of Carolina.

The legendary explorers Ponce de León and de Soto failed to find magic fountains or cities of gold.  Spain later colonized Florida for a much more utilitarian purpose: to protect the sea route to Cuba.  After the first military presidios were established, Spain entrusted the colonization of the hinterland entirely to Catholic missionaries, first Jesuits, later Franciscans.  Missionaries were important in the development of many states in the ASB, but nowhere else were they more directly in charge of administering the territory.  Through a constellation of small missions, the Spanish successfully realigned local chiefdoms and built a loyal, mixed society.

The system came under heavy strain in the late 17th and early 18th centuries due to newcomers from the north: English colonists, escaped English slaves, and Muscogian-speaking peoples escaping pressure on their homelands.  The English burned villages and carried many off into slavery.   So severely did they ravage the land that many villages were abandoned as their inhabitants fled for the fortified presidios.  Into the vacant areas came newcomers from Muscogia.  They came as families and clans that soon coalesced into a powerful new tribe, Seminol.  The Seminol, together with allied groups of escaped slaves, occupied many old Timucua and Apalachi village sites and threatened the entire Spanish presence on the peninsula.

Surviving Timucua and Apalachi groups fought back, and a number of local wars broke out between the Spanish provinces and the Seminoles.  San Francisco de Potano was re-founded as a Spanish-Timucua city in 1740 after a victorious campaign won with military support from Cuba and Mexico.  In other places, the Seminoles and Spanish reached an accommodation.  Seminol families settled on land near the capital, where they accepted a loose sort of Spanish sovereignty in return for peace.  By mid-century the core of the Seminol chiefdom had been driven to the southern part of the peninsula.  Many Seminoles remained living in the northern part but alongside indigenous people and Spanish priests.  Mixed tribal communities of the sort common in the Ohio and Great Lakes regions took shape, their local governments forming the building blocks of a new and more tolerant society.  Border agreements with the Seminol chiefdom and with Carolina finally brought peace to Florida by the late 1700s.

Florida gained greater autonomy from Cuba in the mid-18th century; at the end of the century it was divided into East and West. West Florida, which had few missions and a very low population, filled up with English and French settlers, who for the most part ignored Spain's nominal control and set up their own institutions.  West Florida entered the ASB alliance as a neutral, trilingual state.  In the East, Spanish culture and identity were much stronger.  Between Criollo settlers, Mestizos, and hispanicized Indians, the colonial population was large enough to establish a separate colonial government in 1795. A Captain-General was in charge of civil and military administration; an intendente was responsible for financial and economic affairs; and an audencia served as the judicial branch.  Soon church followed state with the establishment of a bishopric in San Agustín.  East Florida now had the complete package of Spanish institutions, but it remained theoretically subservient to Cuba until the latter half of the 19th century.

Despite the existence of the racial casta system, the Indians of East Florida were more free than in most other Spanish colonies, especially after religious discipline was relaxed as a concession to Seminol settlers.  Slavery, too, was lighter here.  Florida became known as a destination for fugitive slaves from Carolina, who established a number of thriving free Black communities in the thinly populated parts of the peninsula, both in the colony proper and among the Seminoles.  Slavery expanded during the early 19th century, but as in Cuba it came to a society that already had a large free Black population.  In addition, the autonomous colonial government tended to be more moderate and more representative than in Cuba and elsewhere.  For all these reasons, East Florida's later colonial history was much less turbulent than in most of Spain's empire.  Unlike Cuba and the Dominicas, which cast off heavy-handed Spanish rule in a series of revolutions, East Florida evolved into a constitutional monarchy and still bears the title of Captaincy-General.

Dynastic troubles in Spain led to East Florida having a separate royal family from the mother country.  This makes it one of  three states with a local monarch in residence, the Cherokee Nation and East Acadia being the others.  Despite the king's move to America, the state did not call itself a "kingdom" but kept the old title of Captaincy-General. For a while, this was because the royal family continued to claim Spain and considered East Florida to be a colonial dominion. Later they renounced the Spanish throne, but everyone felt that making their state the only one in the confederation to call itself a kingdom would have seemed a bit pretentious.

In the early twentieth century, the new dynasty finally oversaw the transition to full democracy. The government became fully responsible to voters rather than to the monarch or the captain-general. Racial restrictions on citizenship were abolished.

The existence of a monarch and Captain-General side by side has created a slightly odd situation.Their roles are most often described as a "senior head of state" and "junior head of state."  The monarch, currently Queen Mercedes II, embodies East Florida's people and history.  The Captain-General embodies the East Floridian state and acts as a ceremonial commander-in-chief.  Since the monarch as a rule never attends Cabinet meetings, he also sits as the representative of the monarch to the Government.

The office of Intendente has become that of a parliamentary prime minister; that is, the Intendente is the head of government responsible to the elected Cortes, or parliament.  The Audiencia is now a fully independent judiciary with branches in every province.

Florida does not have true political parties, but it does have two recalcitrant factions:

The two labels are in bitter struggle. Despite the fact that East Florida doesn't have real parties, it's one of the most partisan states. Identification as a Populist or as a Loyalist is as important as your culture or ethnicity. Think Thailand, only more stable. (FE's politics, like all ASB politics, comes from Gwen "Turquoise Blue".)

﻿The state is divided into eleven provinces plus the capital region of San Agustín.  The names and identities of the provinces stretch back to pre-Spanish days.  They are sometimes poetically called "the Twelve Tribes of Florida."  Ten of the twelve were missionary provinces that corresponded to local chiefdoms.  Tronatisca was added in 1812 after a treaty fixed the boundary with Muscogía. San Agustín was separated from the province of Timucua a few years later.

Spanish is the main language in East Florida.  Muscogian is spoken in pockets throughout the state, as is English.  Some of Florida's indigenous languages are still spoken in their respective provinces, while others are endangered or extinct.

2. Aguafresca: This miniature province was a chiefdom that had become largely depopulated by the early 18th century.  A  community of Seminol was invited to settle here after they submitted to Spanish rule and agreed to accept religious instruction.  Today it has many large suburban communities, but the Seminol identity remains important.

3. Apalachi: The missions here were a counterbalance to the capital during the colonial period.  In modern times the province has been eclipsed by faster growth in other parts of the state.  This is a reason that traditional Apalachi culture has been preserved so well.  Today it is the best place to experience native Florida.  San Marcos, Florida's second city in colonial times, is today a sleepy waterfront town; most of the action has moved back to the pre-Spanish capital, Anhaica.  The province's proximity to the English-speaking portion of West Florida means that it has a substantial English Carolian population as well.

4. Guale: The original Guale language still exists but is nearly extinct.  The province was a prime destination for fugitive Carolian slaves; later waves of Carolian immigration fixed the province's status as the most heavily English in East Florida.

5. Ibi: An inland agricultural province, its main language is Spanish with some Timucua speakers.

6. Mayaca: The Mayaca people merged into the Timucua long ago.  The largest colonial settlement became Nueva Esmirna, a colonization project contracted out to an Englishman who brought over people from Greece and the Balearic Islands.  Today that town forms the south end of a line of tourist towns, the largest of which is Playa Larga.  Investment from all over the ASB has done much to develop the area for tourism.

7. Mocama: The swampy buffer between the old Timucua and Guale chiefdoms.  Today it is known for posh tourism in the southernmost of the Sea Islands chain.

8. Potano: Swampy province that was repeatedly merged and separated from Timucua.  The main city of Potano is the largest urban hub in the interior of the state.

10. Timucua: Stretches from the metropolis of San Mateo to the Guacara swamps, with rich farmland and forests in between.  Missionaries used the language of Timucua as a "lengua general," promoting its use over the languages of neighboring provinces.  For this reason it became the main language throughout the central part of the state.  The province is the heart of East Florida's agricultural country. rich in staple corn as well as fruits and vegetables for export.

11. Tocobaga: Neglected during the colonial era, the bay became home to all kinds of pirates and outlaws from many countries. Spain addressed the problem in the 1810s-20s and built a ring of forts around the bay.  The original Tocobaga people, with their Spanish priests, largely moved inland.  Today Tocobaga speakers make up a fairly small community.  The ring of forts has grown into a large metro area that is the capital's biggest economic rival.

12. Tronatisca: The name comes from the Muscogian word for flint and the Flint River running through the area. East Florida acquired the land in 1812 and quickly parceled it out to large planters from Cuba and Spain.  Tronatisca is prime cotton growing land and slavery became the basis for its early 19th-century economy. Its citizens delayed abolition in the state for many years. 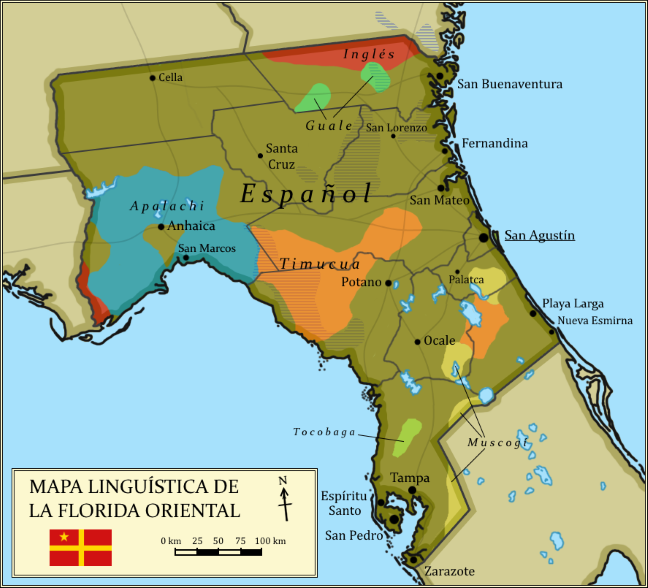 The State Anthem is the Marcha de Granaderos, the royal anthem of Spain. The full traditional performance uses orchestration from the late 18th century, the time that the Captaincy-General was established.