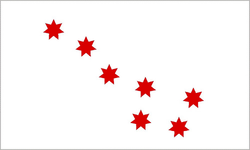 ﻿Cherokee is a constitutional monarchy descended from an early chiefdom.  Its territory more-or-less corresponds to the upper half of the basin of the Tanasi River.  A lot of what I know about Cherokee comes from Carolina, the state that for a long time acted as its protector and suzerain. Much of the following is from Carolina's page. I'll add more eventually.

Cherokee was already a chiefdom in the time of Spanish expeditions through the region.  In the 16 and 1700s it became an English ally. As a way of asserting their overlordship, the English created the institution of Emperor of the Cherokee, conferring the title upon the chief Moytoy in London in 1730.  The title lapsed several times, since at this point the Cherokee were not a modern state and their traditions of leadership were decentralized and informal.  Subsequent "Emperors" were recognized, generally in Charleston or in Keowee, a mixed Carolian-Cherokee town on the present-day border between the two states.

Throughout the late 18th and first part of the 19th century, Cherokee was a Carolian sphere of influence, with Carolina's Governor acting as "Father" of the alliance.  Through the influence of Carolina and local English and Scots traders, a stable institution of Emperor emerged, with village chiefs electing a new Emperor upon the death of the incumbent.

Carolian cultural influence was also strong in Cherokee. More than the other southern Indian states, Cherokee adopted a slave system that was more similar to the Whites and drew less on indigenous traditions. Among Cherokee's neighbors, for example, the children of slaves were usually simply adopted. Not so in Cherokee.

During the two decades after 1800, the Cherokee developed their written language and used it to write a modern constitution. They came into direct conflict with Virginian settlers who were coming over the mountains into present-day Upper Virginia. Loyalist Carolina, determined to safeguard its interests in Cherokee country, posted regular troops all over the area. England sent reinforcements. All-out war broke out between Cherokee and Virginia, part of the continental conflict known as the War of the League of St. Joseph; read the history of Ohio for a more detailed account.

In 1808 in negotiations in the town of Bath, Virginia sued for peace, recognition of its independence, and uninhibited access to its lands west of the mountains. In exchange Carolina got strong provisions recognizing its role as Cherokee’s protector. Any Virginian charged with a crime against a Cherokee, for example, could be tried in Carolina. This practice became so common in subsequent years that “Carolina court” in Virginian parlance came to mean anyone operating outside their jurisdiction. But despite some resentment over particular provisions, the treaty brought peace and secured independence for the Cherokee and, ultimately, the other “civilized tribes” of the region, because the Bath provisions became the basis for similar treaties regarding the Muscogi, Choctaw, and Chicasaw nations.

Cherokee began to emerge from Carolina's shadow in the years after the war. It won the right to send its own delegation to Congress, and its delegates won the right to speak for all people, not just ethnic Cherokee, living within its borders. Pursuing the cause of unity among Indian and Mixed peoples, Cherokee became a firm supporter of the alliance of Ohio villages that was in the process of creating a separate Ohio state. Chiefs and diplomats from Cherokee were instrumental in drawing the major French-speaking states into the alliance, which resulted in the first institution to use the name "ASB". Domestically, Cherokee's government evolved and matured and began to distance itself from Carolina. For example, a law in 1850 banned the importation of new slaves from other states into Cherokee, paving the way for the eventual end of slavery in the state.﻿

The advent of the modern ASB in the 1860s and 70s enforced the principle of equality and brotherhood, not suzerainty and fatherhood.  The relationship between Carolina and Cherokee, like the other unequal partnerships within the ASB, was weakened and finally dissolved.  Today the governor of Carolina is addressed as a Brother rather than Father of the Cherokee Nation.  However, the English monarch continues to be honored as a Grandfather or Grandmother, a purely ceremonial nod to history. Cherokee, alone among the Indian states of the ASB, has kept its monarchy to the present day. In the 1790s the method of his election was made more formal, with the leader of each Cherokee town casting a vote. In 1848 the voting power passed from mayors to electors chosen by the free men of each district. This idiosyncratic "Electoral College" remains the basis for choosing the Emperor today.

The flag seen here was probably first flown before 1700 and may be even older.  Cherokee's War Flag, used by its state militia, has the same design but the colors are reversed.