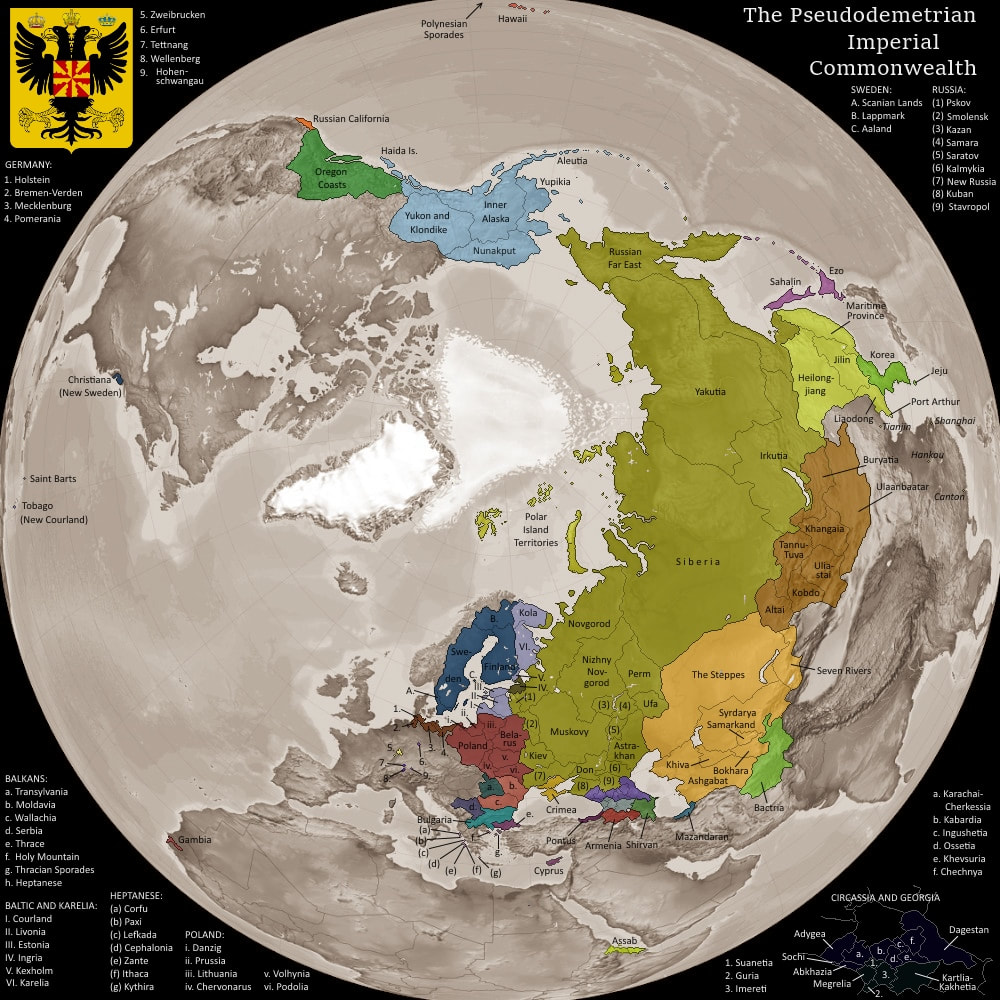 The Imperial Commonwealth's primary divisions are the Realms, which act as basically independent countries on the world stage, all of which are united by the monarchy, the Commonwealth, and a network of other, bilateral ties.  Most of the Realms are organized into four Crowns which stand for historical imperial powers.  The European Crowns of Russia, Poland, and Sweden are the original nucleus of the empire.  The "Crown of the East," formally called the Jian Dynasty, was formed as a conceptual northern Chinese dynasty created after the Manchu banners rebelled against Chinese rule with Russian support.  Manchuria, and later Korea and Ezo, have never been under direct Russian control but have been instead linked to Russia through the Jian Emperor, who is the same person as the Tsar.

The larger Realms are all composites of smaller, traditional lands.  These are collectively called Constituent Countries.  The Countries form the basis of representation in the United Parliament in St. Petersburg. They are also the source of much civic pride and identity throughout the Commonwealth.  Their actual status varies.  Finland and the Lappmark (constituents of Sweden) are almost totally self-governing.  Many of Russia's constituents, such as Kazan and Kiev, are states with moderate autonomy; while others, like Nizhny Novgorod, are little more than large administrative units.  Most Constituent Countries come from traditional lands and divisions, such as the "Kingdoms" within Georgia.  Some, however, are modern subdivisions, such as the "Republics" of Circassia.

The seven islands of the Heptanese are sometimes considered separate constituent countries.  The island nation once had a much looser federal structure, and each island still has a degree of self-government.  The seven are not formally considered "countries" according to the Parliament's official list, but an internal agreement guarantees that each island shall send at least one representative, so they effectively function as constituent countries.  The seven islands, in order of population, are: Corfu, Zante, Cephalonia, Lefkas, Cythera, Ithaca, and Paxi.  Except for Corfu, all have less than 50,000 people.

The Commonwealth also maintains four "settlements," or enclaves, in various Chinese ports.  Begun as joint Russian-Manchurian projects, they are now considered to belong to the Imperial Commonwealth as a whole.  All are quite cosmopolitan, but definitely small.  The two larger settlements, in Tianjin and Shanghai, have substantial populations and have obtained votes in Parliament.  The two smaller ones have not, and their residents look to the Shanghai settlement to represent their interests in St. Petersburg.  Port Arthur, an autonomous city in Manchuria, started as a settlement like these four but today is fully under Manchurian sovereignty.

Finally, three entities on this list have a special status.  The Holy Mountain is part of the territory of the Empire of Thrace, but it is largely run by the communities of monks that live there.  It has a distinct law code and set of institutions, more than qualifying it for Constituent Country status.  But for a variety of reasons it has been considered inappropriate to give the monks a vote in the United Parliament, so its MP is a non-voting member.  The Order of St. John is a medical aid institution throughout the Commonwealth descending from the Knights Hospitaller.  It has enjoyed a deep connection with the Tsars but has always remained independent of any one state. Today its main headquarters are in Cyprus, St. Petersburg, and St. Barts.  It has been represented in the United Parliament since that body's creation but has neither a vote nor territory.  The Cossack Grand Hetmanate is an umbrella organization for the many Cossack groupings throughout the commonwealth.  At one point the Grand Hetmanate actually controlled territory, typically as a vassal of Russia.  Today it is strictly an ethnic organization.  Its member bodies are based mostly in Russia, but there are some in such places as Romania, Crimea, Circassia, Manchuria, and Alaska.  The Cossacks no longer have a vote, but out of tradition continue to send a representative to the United Parliament.