Indian languages of the ASB

Several dozen indigenous languages are spoken within the Affiliated States of Boreoamerica. All are deeply treasured by the communities that speak them, but many are small and struggling to survive in the face of the major European languages. Twenty-five have been given a standardized form, which ensures them a more stable position in society.

Standardization is considered important for an Indian language's vitality. Above all, it creates an agreed written form of the language, which allows for the production of literature and official documents. It also creates a basis for the language to be used in schools and thereby pass to future generations.

Additionally, a standard language serves to draw solid lines around a fuzzy bundle of local dialects. This increases the size of a speaking community, giving the language more vitality, but it can also gradually erase those local dialects as people begin to speak more like the standard. This can be seen with the Muscogui language, whose standardization was published in 1904 and has therefore influenced many generations of speakers. Educators in both Muscoguia and Seminol wanted a single standard that would bridge the dialects spoken in each state. The effect has been for the two forms of the language to become more similar to each other, to the point where people in each state have started to lament the loss of local dialects among the younger generation. For the Anishinaabe language of the Great Lakes, standardized even earlier, this process is even further along, so that the historical Potawatomi, Ottawa, and Ojibwe languages are basically extinct today. (Some dialects that are further from the standard, like Nipissing and Laurentian Anishinaabe, remain relatively healthy.)

Each language on the list is supported by a language academy that sets the standard and promotes the language. Some of these are modeled directly on European language academies and are sponsored directly by state governments. Others are more independent, but most depend on the sponsorship of local governments on some level. All of the languages also enjoy some use in education. The usual pattern is for basic literacy to be taught in the indigenous language, with increasing use of a European language over the course of the primary grades. In most states, secondary education is conducted entirely in a European language; only the specifically Indian states support native language education at the secondary level on a large scale.

Here are the languages in alphabetical order, followed by the states where they are spoken and the location of the language academy. You can see that most of the academies are in state capitals, with the exception of the heavily colonized coastal area, where they tend to be in smaller, Indian communities.


Here's a reference map. Upland is Christiana's legislative capital, so it's counted as a capital city. 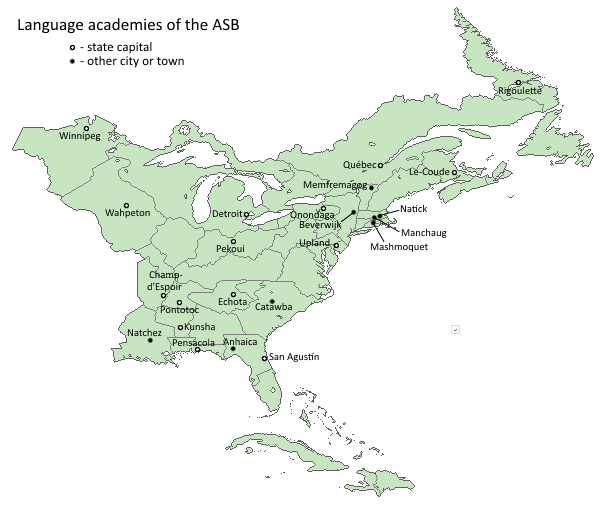