Armed forces in the ASB

The ASB's military is centralized and not run by the states. Removing the power of states to make war was seen as a crucial change that helped bring about the modern Affiliated States. Back in the middle of the 19th century, when the ASB was still hovering between an alliance and a true confederation, Massachusetts Bay, New Netherland, New England, and Newfoundland all had troops fighting in California. The emerging structure of the confederation meant that all the states were worried that they would be drawn into a military adventure that they had no interest in. I'm not sure how long it took everyone to agree to a plan for a combined armed forces, and I would imagine that it proceeded in stages. Those states that were maritime powers in their own right surely dragged their feet on creating a combined navy. But by the 1910s, the confederal army and navy were both in place.

Now state militias continued to exist. I don't have an extremely clear idea of their role because I haven't ever learned much about US militias before the National Guard. It's a topic I'd like to study more. The duties of the Coast Guard in the Great Lakes are also probably handled by a cooperative agreement among the states rather than a confederal force; on the other hand, saltwater Coast Guard duties probably have to be handled at the confederal level, because of the much larger number of states involved. The militias allow the states to maintain their separate military traditions without dictating policy to one another.

One thing to add to the overall military landscape of the ASB: the tradition of signing up for the mother country's armed forces never fully died out. The law c. 1910 that banned colonial soldiers, ships and bases made an exception for recruiters in loyal dominions. The practice is not without controversy, but so far it has not been ended.

By far the leading recruiter is England, which has both a large military and multiple sizable loyalist states in the ASB. It draws recruits from Tory New England, Newfoundland, the Cayman Islands, and Cherokee. The last was the most controversial, for despite Cherokee's historic alliance with England, it has never been a "loyal dominion". But serving in the English army has long been an important part of Cherokee culture, and popular demand convinced confederal officials to allow the practice to continue. Recruitment remains brisk enough that the English army still has an American Regiment made up of volunteers from the ASB states, besides the volunteers who join other branches and services. Cherokee remains the biggest source of volunteers.

New Scotland and New Netherland never completely severed links with their respective colonizers, and during wars of the 19th and 20th centuries some of their citizens did join their armed forces in Europe. But during peacetime, unlike England, Scotland and the Netherlands generally do not seek American volunteers and do not maintain offices in the ASB. A few ASB citizens serve in the French navy, but under the 1910-era law only citizens of tiny St. Pierre and Miquelon are eligible to serve.

Sweden maintained offices until c. 1960, when they became the focus of anti-Russian protests. Christianer were still permitted to enlist at the Swedish viceregal and diplomatic facilities, but few did. Since 2000, amid improving relations and a more popular monarchy, the Swedish Atlantic Fleet has opened new recruiting stations in the cities of Christiana and Upland. Within the Imperial Commonwealth of which both Christiana and Sweden are members, naval forces are international in character. While each realm has its own army, members cooperate in a joint naval command structure under the leadership of Sweden for the Atlantic, Russia for the Mediterranean and Arctic, and all the major Pacific states (Russia, Manchuria, Korea, and Oregon) in the Pacific. 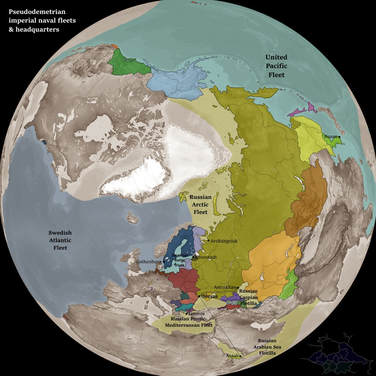