Monarchy in the ASB 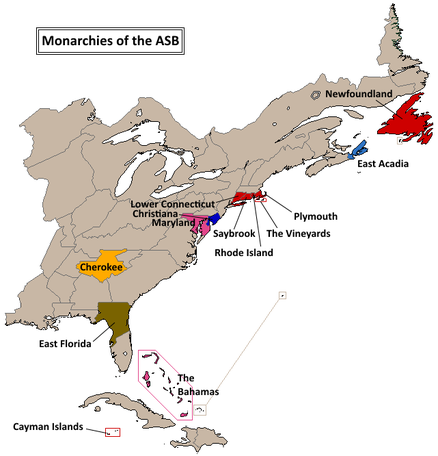 Constitutional monarchy plays a role in the ASB's idiosyncratic political system, because thirteen of the fifty states acknowledge monarchs as their heads of state.  In the colonial alliance system that preceded the ASB, European kings were key, acting as protectors of their colonies and guarantors of the treaties with local nations.  A series of revolutions, both in America and Europe, greatly reduced the monarchs' influence and territory. The maturing political structure of the confederation further limited the ability of monarchs to directly influence affairs in America. The confederal institutions that came to predominate are those that represent the people (namely Parliament and the Grand Council of State), rather than state governments and their monarchs (such as the old Congress). Today, the confederation's six remaining monarchs play an important but largely ceremonial constitutional role in thirteen individual states; on a confederal level their role is minimal.

As stated, six individual monarchs command the loyalty of the thirteen royalist states.  three of these royals, two of European origin, the other indigenous, are locally resident in North America.  The other three are based overseas.

The English Dominions ("The Tory States"): These seven states are those that evolved more or less straightforwardly from royal colonies.  The five small states of southern New England are joined in a single Dominion that ultimately goes back to the 1660s.  Newfoundland made a smooth transition from colony to dominion in the middle of the 19th century.  The Caymans were an English colony that joined the ASB in 1881, a good deal later than most of the states.

The Jacobite Provinces: Maryland supported England's King James II in 1689 and broke away from English rule in the war that followed.  The breakaway province remained closely tied to its neighbors, and both traders and migrants moved quite freely over the border. In the 1710s an alliance of out-of-work Navy sailors and privateers gathered in the Bahamas and declared their loyalty to the Jacobite claimant, who by now was James' son, James III. They lost no time in seeking support from Maryland's government and soon were seen as the legitimate government of the colony.

Royal Province of Maryland
Commonwealth of the Bahamas

Swedish Realm: Christiana passed from Pennsylvanian to Swedish suzerainty in the late 18th century, a consequence of Pennsylvania's determination to stay both independent and aloof from the wars within the English empire.  After regaining the old colony, the Swedish king never played more than a nominal role in Christiana's government.  Still, as (I think) the king is also Tsar of Russia, Christiana is linked through him to a vast worldwide Imperial Commonwealth that complicates foreign relations somewhat in the ASB.

Local Monarchs: Several North American indigenous nations flirted with the trappings of monarchy in ages past, but the Cherokee have been the only ones to keep it.  Their institution was started by the English as a way to dominate a nation they saw as a protectorate.  Today the people of Cherokee are proud of their unique head of state, an elected emperor.

East Florida would have made the same smooth transition from colony to dominion as Newfoundland or parts of New England, but dynastic troubles in Spain itself resulted in one branch of the royal family moving to Florida.  They stayed and have since renounced their claims to the Spanish throne, though they still have some diehard supporters in the old country.

East Acadia became a principality when Emperor Napoleon sent his brother to rule it. Though the appointment was little more than a soft exile, the younger Bonaparte became popular among the Acadian people. Years after the Empire was overthrown, they voted to restore the son of their late prince; the family remains in command today. It is a low-key, bourgeois sort of monarchy that does not trouble itself with the pomp and flair of other royalist states.