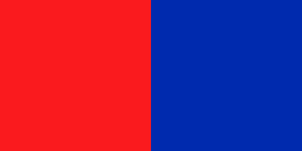 The French Revolution inspired a massive slave revolution in the French colony of Saint-Domingue. The island's new leaders felt an affinity with the liberators of France, and France and Saint-Domingue maintained a loose connection. The Bonapartist regime emphasized shoring up the loyalty, and expanding the territory, of France's many Boreoamerican colonies; therefore, rather than try the impossible task of re-enslaving the islanders, it sent administrators to stabilize the government of the French-speaking west and troops to maintain control of the Spanish-speaking east.

The Bonapartist project for America culminated with the creation of the Kingdom of New France in 1810. The Kingdom was a loosely bound, rather unwieldy institution that nevertheless kept France's colonies together for more than twenty years. Jerome Bonaparte, the new king, made official the policy of leaving the western half of the island to govern itself, while maintaining direct control over the east. Being part of the Kingdom kept West Dominica from becoming a pariah in the region. Governments of the slaveowning states on the mainland might still talk about the revolution with horror, but not enough to break off diplomacy, stifle trade, or destroy the economy of the state. The era of the Kingdom was one of growing cooperation between the French, English, Dutch, and Indian states on the mainland. West Dominican leaders participated in the continental Councils and Congresses of this era. Many of the states of the emerging confederation had racially mixed populations, so the Dominicans were hardly the only nonwhites at the table. When the Kingdom crumbled apart in 1833, the Dominican people were an accepted member of the community of states.

The West Dominicans declared independence as the Republic of Saint-Domingue, claiming the entire island. Both Canada and France also claimed the east. West Dominican troops overwhelmed French positions in the mid-1830s, but the ongoing dispute soured relations with the rest of the ASB. In the 1840s, occupying forces agreed to a division of the island into two republics under the names of East and West Dominica, each remaining a member of the confederation. The division followed the linguistic boundary.

As a part of the ASB, West Dominica's history was hardly one of unending tranqiuility. The era of the Kingdom was marked by constant unrest of one kind or another and at least two attempts to establish Empires under local strongmen. Those impulses continued after independence. But the connections to the ASB mitigated the disasters that marked the country's OTL history. The revolution hurt sugar and coffee production, but they rebounded. Cacao was introduced and became another important export. Some of the most serious political disputes were settled by mediation within the confederal institutions. In the later 19th century, the state's members of Parliament became strong advocates for abolishing slavery throughout the confederation.

Since the mid-20th century tourism has been an increasingly important part of the economy. Nationalism has emerged as a cultural and political force, as it has in many of the other Francophone states; but this tends to be about local pride and populism rather than separatism. Only a few in West Dominica seriously want to leave the ASB. 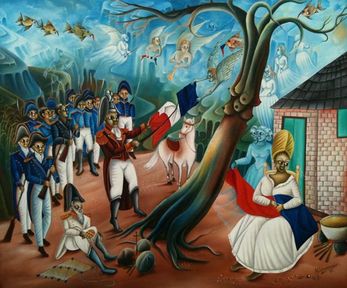 The flag of West Dominica is the revolutionary flag that we know from our timeline. It was created by removing the white from the flag of France - the political and racial symbolism was clear. The flag changed less in this timeline, reflecting the much, much greater stability in the history of West Dominica as compared with our Haiti. The red and blue colors switched places a few years after Haiti cut all ties with France in 1833, mainly so it would look less like the French flag when hanging from a topmast.