Assiniboia is a very large state on the prairies between Lake Winnipeg, the Lake of the Woods, and the upper Missouri River. Its largest ethnic group, the Assiniboia Métis, consider themselves to be a distinct nation. The descendants of voyageurs and buffalo hunters, the Métis people of the state are immensely proud of their distinct culture and history. Joining the Affiliated States fulfilled a decades-long aspiration for them. The member states of the confederation had anticipated Assiniboia's accession so eagerly that they broke the usual rule against acquiring new territory. It was the last time that the ASB's borders were expanded.

While Assiniboia is a Francophone state, the rural areas largely speak Michif. A blend of French and Cree, Michif is remarkable among the world's mixed languages. It appears to combine features of the two without creolization; that is, without simplifying the grammar. Both French and Cree in their full complexity contribute to the language. Once linguists had studied Michif and their descriptions became widely known, this became a natural metaphor for Métis culture and for the state itself. Besides French and Michif, English is spoken in pockets of the state. The indigenous Lakota, Dakota, Nakota, and other Siouan languages are spoken as well, along with the Algonquian languages Cree and Anishinaabe. 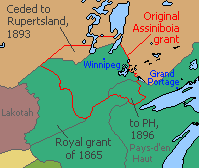 Assiniboia was founded by the Hudson's Bay Company. The company controlled the fur trade around the bay and throughout its territory of Rupertsland. Beginning near the end of the 18th century, the company's directors tried to attract settlers to the southern part of their territory. An agricultural colony, it was thought, would broaden the base of the region's economy and provide the Company with a source of loyal local manpower.

However, this small group of settlers was coming into a region that was already developing into a distinct society. For years, voyageurs of French and Mixed origin had been coming up from Lake Superior to obtain furs and supplies. Assiniboia lay on the boundary of the forested lands, source of the furs, and the Great Plains, whose nomadic tribes produced things the traders needed, most notably the traveling food pemmican. In the villages where nomadic groups wintered, many voyageurs had begun to put down roots. Their children were the first of a new group, the Assiniboia Métis - often calling themselves the Métis, then and now. In dress, food, music, religion, and language, the Métis culture taking shape in Assiniboia combined things from French Canada, the Great Lakes, and the indigenous cultures of the prairie.

​These people regarded the English newcomers with some suspicion. Besides coming from a foreign culture, the English settlers practiced patterns of agriculture that possibly posed a threat to the fur trade system that sustained them. But farming the prairie in those days was exceedingly difficult. The company was not able to attract many settlers, and the Assiniboia settlements remained small. In fact they attracted more Métis traders than English farmers. The river towns grew as centers of trade rather than as the nucleii of the imagined English colony. The English made some attempts to spread their way of life by granting plots to Métis families and establishing mission schools, but most of the people of Assiniboia saw England as not much more than an employer.

The ambitions of the Hudson's Bay Company did provoke conflict with the Canadian fur companies that had dominated the region. Agents of the company first fought against Canadian voyageurs in the first decade of the 1800s as an outgrowth of the general war between England and France. The prize was the Grand Portage Country, the region northwest of Lake Superior that connected the basin of the Great Lakes with that of Hudson's Bay. Traders at Grand Portage bought furs that had been caught throughout the western plains; they therefore cut into what the Hudson's Bay Company saw as its own rightful trade.

In 1809 the two sides made an agreement to limit competition and share the profits from the region's fur trade - essentially to form a cartel. The agreement allowed both Rupertian and Canadian traders to move freely in both Grand Portage and Assiniboia. But just the following year Jerome Bonaparte came to Canada, and under him New France relaxed the mercantilist policies of the ancien regime. The Lakes were opened to traders from new, private companies. Among the most powerful were a trio of trading companies based in New Scotland and backed by Scottish and Yankee investors. Their traders brought a new wave of violent competition, and outright war broke out in 1820 between traders loyal to New Scotland and those loyal to Hudson's Bay.

The fighting eventually gave way to more peaceful and regular economic competition. In Grand Portage, a civil society was developing as the population grew, and the end of rule by trading companies led to more clear borders and greater distinction between business and government (though the biggest shipping companies would have some power in the government of the country until the 1890s). In Assiniboia, new licensing rules attempted to allow for limited outside competition while directing the bulk of the colony's trade toward the Bay. The right to trade with Great Lakes businesses long remained a point of contention between the Métis and the English authorities.

The next few decades saw further development of Assiniboia society under Company rule. The HBC continued to select the lieutenant governor and council of the colony, but the Métis villages were largely left to govern themselves. England remained highly suspicious of any movement toward colonial self-government. More and more, the idea of autonomy was connected to the idea of political and economic ties to the ASB states. England rightly feared that if Assiniboia were free to go its own way, it would fall naturally into the ASB's orbit, and England would lose control over one of the most lucrative parts of Rupertsland. Assiniboia was allowed to send delegates to the ASB's Congress, but the lieutenant governor blocked efforts to participate in the Grand Council and other institutions.

In 1865, England and the ASB's Grand Council signed a treaty to set the permanent border between Assiniboia and the ASB states. This epochal treaty was the first time that the Grand Council acted on behalf of the entire ASB to make a treaty with another nation. The precedent that it set is part of the reason that the Foreign Ministry today is connected to the Grand Council of State rather than the Parliament.

The treaty frustrated Assiniboia's efforts to join with the ASB's institutions. England intentionally worked through the Grand Council and not the Congress for the simple reason that Assiniboia had no presence on the Council. Through the treaty, England was able to frame Rupertsland and Assiniboia as territories outside the ASB, rather than as peripheral or potential members of the confederation. The treaty happened to coincide with major restructuring of the ASB institutions under Chief Minister Armand Linville; it was not long after that Congress ceded much of its power to the newest confederal body, Parliament. Within a few years, Assiniboia's colonial government stopped sending even symbolic Congressional delegates. The causes of self-government and ties to the ASB thus became ever more closely linked.

At the same time that the treaty was ratified, a new royal proclamation extended the boundaries of Assiniboia south and west as far as the Missouri River. A few years later, a treaty with the Lakotah made that border final.

Development in the late nineteenth century

A mining boom in the 1880s changed the society of Assiniboia and set the colony on the path to revolt. The mines attracted new English (and Irish and Welsh) settlers. There was ethnic, cultural, and economic tension between the newcomers and the Métis. Besides English language and culture and religion, the newcomers brought a new economic system that once again threatened the traditional way of life on the prairies.

A national consciousness took shape, with political implications. The Métis flag, which dated to the trade conflicts of the 1810s and 20s, started to appear throughout the colony. A red flag came to stand for Métis nationhood under the English crown, while a blue flag stood for complete independence.

In 1889 England decreed that Company government of Assiniboia would come to an end. The English Parliament legislated a complete colonial government for Assiniboia. Voting rules gave a good deal of power to Anglophone settlers. The Métis were galvanized at what seemed like a deliberate attempt to stamp out their nation. In 1893 they rose up in revolt.

England occupied the northernmost parts of Assiniboia but was unable to reverse the revolt. The rebels, who were clear in their intent to apply for statehood in the ASB, enjoyed broad support across the border, making it even more difficult for England to completely quash it. It accepted what now seemed inevitable: self-government and statehood for Assiniboia, with the Métis majority having control of the government.

Assiniboia entered the ASB as a loyal Englsh Dominion. But this compromise regime, always wobbly, collapsed after five years. The state government, still under the control of leaders of the revolt, declared Assiniboia a republic in 1898.

The declaration sparked another revolt. Mesabi, an area of rich iron mines, was the easternmost part of the state and the most strongly Anglophone, many miners having settled there in the 1880s and 90s. The Mesabi towns announced their own secession from Assiniboia. After flirting with the idea of becoming a separate dominion, their final decision was a request to join the Upper Country as one of its autonomous constituent countries. They believed that the Upper Country's looser structure would better protect their language and culture than a vengeful revolutionary Assiniboia republic, and it made sense in light of the strong economic links between the Mesabi Range and Lake Superior. Assiniboia mobilized its militia in response, and the Upper Country did the same. The war was the last time in the ASB's history that blood was shed in a conflict between states. Parliament arbitrated the issue and Mesabi became part of the Upper Country.

Modern industrial society came quickly after statehood. A railroad was completed to connect the state with both the east (the ASB) and west (Rupertsland). New land was also opened to wheat farming, made possible by new advances in agriculture. Both of these changes brought in many new immigrants. Many Métis questioned what good the revolution had accomplished, if the traditional way of life was disappearing anyway. But most state leaders believed that the passing of the fur trade system was inevitable; that the choice was modernization or poverty. They sought ways to preserve their state's identity within a rapidly changing economy.

Language and school policy became important. The state set up a dual public school system with both French and English speaking schools. The schools became an important vessel for Francophone Métis culture.

Assiniboia in the late 20th and 21st centuries

Assiniboia continued to evolve. Mining remained a pillar of the economy as iron ore gave up its primacy to mineral mining, then petroleum. Modern agricultural methods led to depopulation in rural parts of the state. But village life has kept its vitality, as many urban Assiniboia still have family and emotional connections to their former villages, and many return there frequently. This follows a pattern seen in rural villages throughout the ASB.

The last half-century has also seen the state move beyond bilingualism and give more recognition for Michif and other indigenous languages. Assiniboia is a state where questions of identity run deep, and almost any political issue can be framed as a question of "Who are we as a people?" This means the state often has a contentious political culture as its people continue to work out answers to that question.