It is hard to overstate the influence of Canada in the ASB.  Its 17th- and 18th-century alliance with the Indians of Huronia and the Upper Country was an essential precursor to the confederation.  The way it related to its inland allies helped establish a model for cooperation that made the ASB possible.  Its cultural assertiveness has helped drive and inspire the creation of independent cultural institutions throughout Boreoamerica.  Political concerns within Canada have helped set the agenda for the whole confederation.

With all this going on, I must confess that I don't yet have much written for the state. I want to use the modern-day flag of Quebec if I can possibly justify it. Gwen has devised a set of political parties for the state, and I have begun to sketch out a history of the place, using some material from Rebecca "Upvoteanthology". 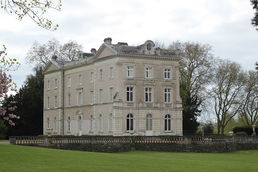 In the 1810s France was an empire. Napoleon in this timeline certainly fought his way around Europe, but his ambitions there were slightly less universal. Either he died early, or else he and his advisers had a healthier respect for their armies' limits. At any rate, France in this era refrained from attacking Russia, relinquished most of its conquests in Europe, and focused its expansionist impulse overseas. The reconquest of Dominica and Louisiana* were only slightly more successful than they were in our timeline - they both ended in negotiated settlements that fell apart not long after - while France's conquest of Patagonia was famous for its quixotic gallantry.

Meanwhile, Napoleon sent members of his family to govern his conquests. He sent his brother Jerome to Canada as "King of New France". He was to rule all the Boreoamerican colonies as a vassal kingdom of the French Empire. But Jerome never really fit in. Louisiana and Dominica for the most part ignored him, while the Canadian seigneurs, used to dealing with a faraway ruler, resented the sudden appearance of a monarch in their midst.

Worst of all, Jerome had a hard time understanding America's complicated political and diplomatic landscape, and Canada's place in it. He had the respect of the small urban population of Québec with his lavish building projects in the city, and his liberal reforms to the seigneurial system won him some supporters among the habitants. But the Métis and Indians who were the real base of Canada's power did not like being treated as subjects any more than the great landowners did. They resented Jerome's haughty style of rule, represented by his palace on the île d'Orléans. . When the elections he called produced a parliament mostly opposed to him, he chose to rule mostly on his own, ignoring parliament as much as he could.

This wasn't always possible, and events in America revealed the weakness of French rule. In 1822-1825, Canadian and Louisianan militia and allies fought for control of the route from Lake Michigan to the lead mines on the Mississippi. Known as the Kishwauki War, it was noteworthy for how it was resolved: though both Canada and Louisiana ostensibly were still French colonies, to mediate their conflict they looked not to France, but to chiefs in Ohio and other American neighbors.

In 1833, another revolution toppled Bonapartist rule in France. The Canadians took the opportunity to depose Jerome's government at the same time. By then France had treated Canada as a separate vassal kingdom for a good twenty years, taking its loyalty for granted. Now there was no hope of reconquering it. Most Canadians wanted a monarchy but could find no French royal willing to accept the throne. But monarchism remained an active force in Canadian politics for years.

*West Dominica and Louisiana had broken away from French rule during the Revolution, and for opposite reasons: the Louisianan planters revolted to prevent the abolition of slavery, while the Dominican slaves revolted to bring about a faster, more complete abolition.

Liberal Party (Parti libéral): Canada's traditional "left-of-centre" party, it dominated Canadian politics in the 1930s-60s and remains the main opponent against the Conservatives and Nationalists. Currently led by Dominic LeBlanc, Governor of Canada. Affiliated with the federal Progressives, but didn't change their colour.

Conservative Party (Parti conservateur): Canada's traditional "right-of-centre" party, it was weakened by the rise of the Nationalists, but is back to opposition after a long time in the wilderness. Led by Maxime Bernier, Opposition Leader. Affiliated with the federal Democrats.

Nationalist Party (Parti nationaliste): A party ostensibly to the left of the Liberals, they are mainly defined by their nationalist stance, arguing for Canadian souverainism. Main opposition to the Liberals in the 70s-00s, but fell to third last election. Led by Jean-Francois Fortin. Affiliated with the federal Bloc National.

Socialist Party (Parti socialiste): The most left-wing of the Canadian parties represented in parliament, this party has always been more radical than its federal counterpart due to never being in government, with the closest being giving supply and confidence to a Nationalist minority. Led by Andres Fontecilla.

Green Party (Parti vert): Unlike most other Green parties, this one is mostly environmentalist and so gets its seats in urban areas. It is broad-tent, with conservative and leftist elements. Led by David Chernushenko (the only Anglo-Canadian party leader in Parliament!), it is of course affiliated with the federal Green Party.