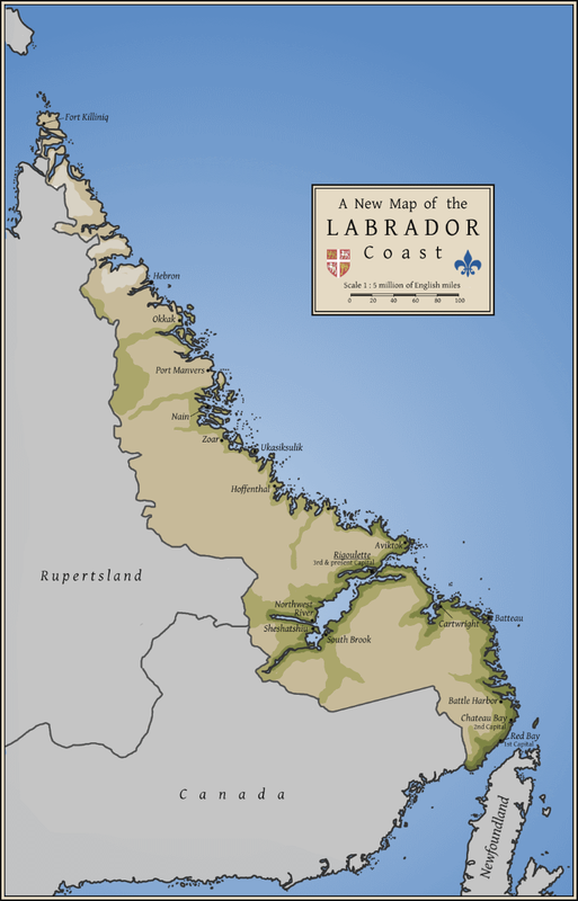 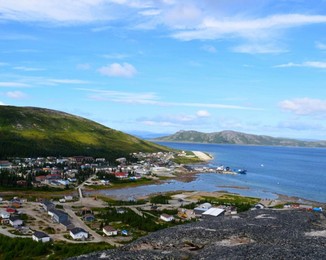 Labrador is one of the ASB's smallest states by population.  It's comparable in size to some of the Little Island States, but its people are spread out over thousands of square miles of territory. It is the ASB's only subarctic state, very isolated from the rest of the confederation and inaccessible by land.  Four major factors shaped its history: Labrador's cold climate, its abundance of marine resources, Moravian missionaries, and rivalry between Canada and Newfoundland.

1. Climate and People
The cold climate meant that Labrador's population has always been small and relatively few outsiders have moved in.  To this day Labrador's population is mostly indigenous or Mixed.  The three main groups are the Inuit, or Esquimaux, in the far north; the Naskapi, more or less in the center; and the Montagnais, who live throughout the south.  The Naskapi and Montagnais speak the same language and are sometimes grouped together as the Innu.  Non-indigenous settlers have largely intermixed, but distinct French, English, and German communities can still be discerned.

2. Harvesting the sea
Labrador's cod, whales, and seals early on attracted people from Europe - from Portugal, Normandy, Brittany, and the Basque Country.  These men rarely stayed long, but they established seasonal stations in Labrador that are among the oldest European settlements on the continent.  French, English, and Dutch ships came later in the 17th century.  The English and French operations were based in the colonies of Newfoundland and Canada, respectively, and the administrators of both colonies considered Labrador to be part of their respective hinterlands, useful mainly as a source of fish.

3. The Moravians
The Moravian Church originated in an 18th-century revival of the teachings of the reformer Jan Hus.  Moravian missionaries, largely Germans, were active among Indian communities throughout the ASB, but Labrador was their most successful project.  A solid majority of indigenous Labradorans are Moravian Christians today, which equates to a slight majority of the entire state. The Labrador Church recently became a full province of the church with its own bishop, who informally acts as a spiritual advisor to the entire state.  The church operates several schools in Labrador, but clergy are trained in the seminary in Bethlehem, Pennsylvania.

4. Canada and Newfoundland: The Origins of the Labradoran State
The Labradoran state gradually evolved out of a need by Canada and Newfoundland to regulate and control fishing activities along the coast. Canada granted seigneuries in Labrador beginning in 1702. The holders of seigneuries expected to profit through hunting seals and trading with local people.  Labrador was not suited to the development of a landed gentry like that of central Canada, and this was never the plan. But the holders considered their concessions to be their personal property and resented any attempt to deprive them of their property rights.

For many years the English of Newfoundland only used Labrador to dry cod they caught offshore, an activity that allowed easy coexistence with the Canadians.  The only permanent English presence was a single blockhouse built to guard equipment over the winter.  But in the late 1700s the governor of Newfoundland began granting concessions to colonists for catching seals and salmon onshore. This put English and French claims in direct conflict with each other.  Since as yet there were few permanent European settlements in Labrador, these conflicts concerned mainly exploitation rights, and it was possible to arrange for shared use of the territory.  After a great deal of contention and some bloodshed, Newfoundland and Canada reached an agreement around 1800.  Limits were set on the salmon and seals that could legally be caught by English and French colonists.  To enforce the settlement, a joint Canadian-Newfoundland post was set up at Red Bay.

All of the state institutions of Labrador evolved from this Anglo-French arrangement for jointly regulating the region's hunting and fishing.  The post soon took on the character of a local assembly and admiralty court.  Representatives of the holders of English and French concessions sat with colonial officials to arbitrate disagreements.  Before too long they were also meeting with Innu and Inuit leaders and deciding matters of territorial policy. In the early 1800s the settler population began to grow, largely made up of Newfers but including Canadians, Acadians, and some Yankees from New England.  The new residents demanded representation, and increasingly so did Indians and Moravian clergy.  The maritime authority's slow transformation into a state government was marked by a change in location.  It moved from Red Bay to Chateau Bay in the mid-1800s, and then further north to Rigoulette toward the turn of the century.

So by 1900 Labrador was governed by the General Court of the Labrador Coast, a representative body that combined legislative and judicial powers.  Because of the ASB's electoral reform law of the 1890s, members of the General Court were chosen by universal male suffrage, and the Moravian Church no longer sent voting members. But the Court still answered to Canada and Newfoundland, and the territory remained a condominium between those two states rather than a full member of the ASB confederation.  Two Lieutenant-Governors, one from each state, had final say over the Court's decisions.  Such relationships had been common in the ASB's early days, but remote Labrador was one of the last of the confederation's internal dependencies.

The General Court itself provided the impetus for complete self-government.  In 1950 the Court voted to grant itself complete authority to run the affairs of Labrador without regard to either of its parent states.  Naturally the motion was vetoed by both Lieutenant-Governors. But Labrador took the matter before the confederal Parliament. Labradorans knew that they would find much sympathy there. Parliament supported them and ordered a referendum to be held for the sake of form; three years later Labrador became the ASB's newest state.

The General Court is still Labrador's main governing body today, and Canada and Newfoundland still send Lieutenant-Governors. Only now they are strictly advisory and are subordinate to an elected Governor.  Executive power belongs to the Governor and a cabinet of ministers selected by the General Court.  This is therefore a semi-parliamentary system.  Within Labrador's very small body politic (its population today only numbers around 15,000), the General Court has kept its judicial authority in civil, criminal, and maritime matters.  This makes Labrador one of the only polities in the world without an independent judiciary.  This repeatedly draws the attention of reformers from inside and outside the state, but so far none of their proposals have succeeded.  Most Labradorans are happy with their unusual form of government, saying that it suits their needs as a small, indigenous community in a remote part of the world.

As always, all credit for Labrador's political spectrum goes to Gwen "Turquoise Blue".

Labrador dominates the state like Fianna Fail once dominated Ireland. First place every time and majority most of the time. However, a "National Socialist" coalition sometimes kicks them out of power. Currently the Nationals and Socialists are in Opposition, recovering from their last disastrous government. Labrador currently has a supermajority in the General Court and holds the Governorship.