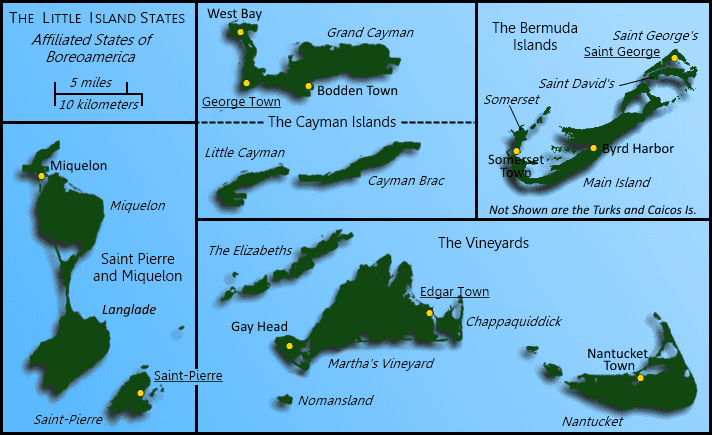 The Cayman Islands are one of the Little Island States, a tiny tropical paradise to the south of Cuba. They were a late addition to the ASB community of states.​

In the 17th century, the Caymans were settled by a motley crew of people fleeing Cuba and other Caribbean colonies.  At the beginning of the 18th century the English created the first permanent colonial institutions and attempted to govern it as a run-of-the mill sugar island.  This never really succeeded, given the island's proximity to Cuba and its rather lawless past.  English rule eventually did take hold, and representative government was established in the early 1800s. The islands were a dependency of Jamaica in the early days, but in the mid-19th century voted to ask England to detach them from Jamaica and allow them to pursue membership in the ASB.  This was granted in the 1860s, and in 1881 the Cayman Islands were admitted as an ASB member

The annexation of the Cayman Islands was an unusual event in the confederation's history. The Caymans are near Cuba and had some economic connections with other states in the ASB, but they had no prior political connection. Most other members of the confederation did not "join" at any specific moment in time; they are members because the ASB is a culmination of earlier relationships and alliances. The Caymans are just about the only example of the confederation simply expanding into new territory to admit a new member.

The flag of the islands is based on the pattern of the loyalist New England provinces, using a green sea turtle where New England uses a pine tree; however, the Caymanian flag uses a square cross of St. George alone, without the large field of the Red Ensign.