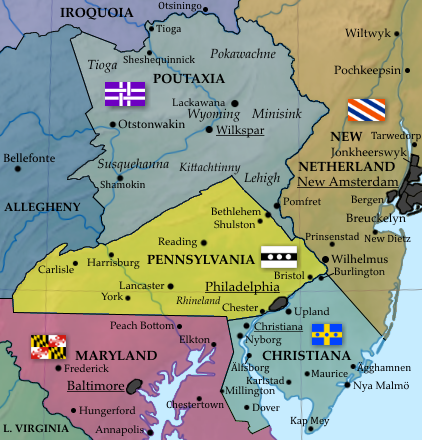 Founding Pennsylvania
​
Pennsylvania was founded by William Penn in 1681 via a royal grant from King Charles II. Penn's father had loyally served the Stuarts and had lent them a good deal of money. The proprietary colony was part of the payment for this debt. The grant laid out a new colony to the west of the Delaware (or Poutaxat) River. It gave Penn and his heirs ownership of a great expanse of land and the freedom to govern it as they saw fit.

The land was in fact part of the spoils of war against the Netherlands. Fifteen years earlier, English forces had occupied New Amsterdam. The colony was ultimately returned to the Netherlands. However, its western border was set at the Delaware, and England received the land at the river's mouth, which formerly had belonged to Sweden. The king's brother James, the Duke of York, received this lower territory, today the state of Christiana, as his own colony under the official name of New York. "New York", however, proved not to be terribly profitable as a proprietary colony. Once the duke ascended to the English throne in 1685, he sold his rights there to a company of landowners. Penn was one of them. Since by then he was present in his new town of Philadelphia just west of the river, he became Christiana's de facto ruler. This set the stage for the former Swedish colony's many years as a dependency of Pennsylvania. As king, James focused much more attention on reorganizing the government of New England than on the small, new settlements on the Delaware.

William Penn's style of rule was liberal and benevolent, despite his near-feudal status. His commitment to a free and pluralistic society attracted people from across Europe and America. The greatest landowners were Quakers like Penn, but they were joined by Lutherans and Moravians and Mennonites from Germany, Baptists and Methodists from England, Huguenots, Jews, Irish, American-born children of mixed-race marriages... This motley collection of peoples soon made the colony an economic and demographic force to be reckoned with. The Pennamites, as they became known, emerged as a distinct group, speaking mostly English but also some German, eventually spreading far into the Alleghenies and the Ohio Country as well as taking up a considerable portion of the Caribbean carrying trade. ​

The Jacobite Wars were the start of Pennsylvania's famous "drift toward independence", almost four decades of mutual neglect between the colony and the English government. The Penns had been allies of the House of Stuart and had Jacobite sympathies. So when King James was deposed in 1688, William Penn was slow to acknowledge the usurper as king. He avoided outright involvement in Jacobite activity and did not join Maryland when it rose up to support King James. However, Pennsylvanian merchants certainly helped to supply arms to the Marylanders, and Penn certainly tolerated and may have encouraged this support.

Thirty years later, supporters of James' son rose up in both England and Scotland. The rebellion amounted to a new civil war and led to renewed fighting in the colonies. Jacobite privateers seized the Bahamas and founded a new colony there. Virginia again invaded Maryland with support from New England volunteers. Pennsylvania, now under the leadership of William Penn's son John, again was ambivalent. John and many of the leaders of Pennsylvania continued to have lingering Jacobite sympathies. Furthermore, they saw in the rebellion a chance to resist royal control. On the other hand, they knew how disruptive an outright war would be, right at a moment when the colony was growing quickly and making money from trade and commercial grain farming.

Therefore, Pennsylvania declared its neutrality in the war.

, so they and a few other leaders in the colony declared their neutrality when their neighbor Maryland declared in favor of the exiled King James II. Local Pennamite merchants used their wealth to support the rebels in Maryland and the Bahamas, which also rose up to support the Pretender. Their money was key to propping up these two states, which, cut off from English resources, became virtual economic dependencies of Pennsylvania.

The local government of Pennsylvania continued to maintain its "neutrality" long after the wars had concluded. Back in England, members of the Penn family of course insisted upon their loyalty to the actual king. But during the proprietorship of William Penn's sons, many key members of the family relocated to the colony, spending less time in England. By the 1760s, Penn boys were still going to school in England, and a family member was always present in London to arrange for favorable trade, but the family was putting down roots in America. They were born, married, and died in Pennsylvania, and an increasing percentage of the family's fortune was tied up in the colony.

William Penn followed a policy of utmost respect for the rights of the Indians into whose lands he moved. Pennsylvania expanded quite slowly, and it developed a settler population that was dense and productive rather than one that quickly spread out to new lands. His son John was less concerned with Indian land rights. In the 1730s he negotiated the so called "Walking Purchase", a deal that defrauded the Lenape people of a huge tract around the mouth of the Lehigh River. New Netherland and the Iroquois later rose up to protest the purchase, and after the so-called Lehigh War of the 1740s John was forced to relinquish the disputed land.

The Wars of Independence

​When Virginia and Massachusetts declared independence from England, war again erupted all along the line of English colonies. This time it would not be possible to stay ambiguous toward England: Pennsylvania was forced to choose a side, and it chose independence. Pennsylvania avoided direct battles with English troops, but Pennamites fought New England Loyalists in confrontations all across the west, from the Delaware to the Detroit. The Pennamites themselves caught the spirit of republicanism as well, and the Assembly declared Pennsylvania a Commonwealth and wrote a new, republican constitution. The Penn family was not completely gone - their cooperation was needed, if not their enthusiastic support - but the power they had enjoyed for a century was ended.

The Penns thenceforth would have to defer to the Assembly and accept subordination to an elected Governor who would be the chief executive. The office of governor was thus separated from Proprietor, and the Proprietor's role was reduced to controlling a few seats on the Council of Review, which had the power to veto bills. The leading Penn was entitled to be part of the body, which today is called the Executive Council, as well as appoint two other members. The governor controls the same number of seats, and the remaining six seats are chosen by the parties in the Assembly in proportion of their seats there.

Pennsylvania, though small in size, has exerted much political, economic, and cultural influence on the ASB. Together with New Netherland, Pennsylvania can take credit for the confederation's tolerant, pluralistic attitude toward culture and religion. Much of Ohio, Allegheny, and the western states were settled by Pennamites. The state was an early leader in North America's industrialization, so Pennamite companies and products were widely used all over.

Pennsylvania still uses the Penn family arms as its flag, a nod to the Proprietor who still has a big office in the Capitol and who remains an important figure in the state. Below to the right is the sign for Pennsylvania's state highways, which also comes from the arms. ​