Massachusetts Bay was founded by strict Puritans seeking a religious utopia. Their vision was a society of autonomous town-congregations, bodies of devout free men who managed their communities' civic and religious affairs, without distinguishing much between the two. Puritanism dominated the colony into the late 17th century, but a combination of changing religious sensibilities and pressure from England loosened its hold.

By the later 18th century, the colony was a hotbed of liberal religion and political radicalism. Relations between local leaders and England grew increasingly tense as the mother country attempted to impose new regulations and taxes. A complex dispute over import duties on tea led to unrest, then violence, then war. Massachusetts Bay finally declared its independence from England and influenced a number of other colonies to do the same. The Wars of Independence raged up and down the seaboard and west as far as the Great Lakes. Overall they ended inconclusively, with England still in control of several colonies and with much territory remaining in dispute, especially along the Virginia-Carolina border. Massachusetts, however, won definitive and permanent recognition of its independence in the Treaty of the Hague of 1785.

Massachusetts Bay and the other newly independent states made a few attempts to form a new, united republic. Massachusetts, New Hampshire, Vermont, Connecticut, Plymouth, and Rhode Island established the Confederation of New England during the war. Connecticut, Plymouth, and Rhode Island later came under the influence of loyalist governments, left the confederation, and returned to the Empire. Vermont. involved in almost constant disputes with New Hampshire over land, also left and re-joined the confederation several times. There were also attempts to create a wider congress to bring together all of the new Anglophone republics, both north and south; however, these states instead continued to meet with representatives of the loyalist states in what today are called the Anglo-American Congresses. (These meetings, the successors to something like our world's 1754 Albany Congress, had begun well before the Wars of Independence and continued to occur after they ended.) This Congress became more and more a permanent body meeting in Philadelphia, and soon it was also drawing representatives from New Netherland and Iroquoia and their dependencies. Eventually this whole web of alliances became part of the structure of the ASB itself. What was left of the Confederation of New England came to an end.

By the time of independence, Massachusetts, and its capital city of Boston, had already been the economic driver of New England for over a century. The revolution unleashed a new spirit of free-market capitalism. In the first half of the 19th century, Massachusetts Bay became a major world trading power. Its ships crossed the Atlantic and Pacific. The state was an economic force on the west coast, in the South Seas, and as far away as China and Japan. This global reach even turned Massachusetts into an imperial power in its own right.  Most prominent was San Francisco, where it established a trading enclave. After the Gold Wars broke out in 1860 this grew into the State of San Francisco, which Massachusetts Bay ruled in condominium with New Netherland until the early twentieth century. SF was Massachusetts Bay's biggest experiment with imperialism, but not its only one. Some Pacific island states are still associated with it and are considered part of the ASB's peripheral territories.

In the second half of the century the state became an industrial power as well. A great wave of European immigrants helped build up the state's factories and cities. Massachusetts led the continent's industrialization; for a time the Boston area was the undisputed heartland of Boreoamerican manufacturing. The economy adapted well, if unevenly, to changing times; the area around the capital remains a leader in such modern sectors as information, education, and hi-tech manufacturing.

Liberal Democratic Party
Often mocked by Progressives and Whigs of other states for being "more Labor than Liberal", the Liberal Democrats considers itself a "pragmatic centre-left party", with policies sometimes to the left of the "New Socialists". It declines to affiliate with any party, but its members are overwhelmingly either Socialist or Progressive at a federal level. The LDP is for all intents and purposes the traditional party of unions in Massachusetts Bay, although it has became more centrist and open to "pro-business" policies thanks to the influence of the tech sector which considers it the party closest to their ideas. Currently has the biggest seat number, but is out of government.

Conservative Party
Massachusetts Bay's centre-right party, it has struggled to win back government since the collapse of its support in the 2001 election, but under its new leader Scott Brown, it has almost matched the LDP in terms of seat numbers and has entered in a coalition with the Green Party. It is currently optimistic about the coming presidential election. Thanks to Massachusetts Bay's growing tech sector and cosmopolitanism, the Conservatives here are relatively moderate by ASB standards.

Green Party
Once the governing party in the distant past, it currently is a considerably-rural party with some suburban intake. It is the most hostile to the growing tech sector, seeing it as a sort of threat to rural Massachusetts Bay and "Massachusetts values", although it takes pains to emphasise that it is not hostile to immigrants per se. On the right of the Boreal "green" tradition, more agrarian than environmentalist.

Significant parties not represented in the Great and General Court, but in local government.

Labor Unity - Socialist Party
Once the Socialist Party's affiliation in Massachusetts Bay, since their disappearance from Parliament, the affiliation has gone and so has their relative relevancy. They still hold hopes that they will bounce back and return to Parliament, although their habit of withdrawing in LDP-Tory marginal seats in favour of the LDP makes their favourable polling [they consistently poll above 5%] a mirage at best. They're very much "traditional-left", deploring Bellamy's centrism and the tech sector's anti-union sentiment.

One Boston
This party only runs in Metropolitan Boston, and is generally a "Boston-regionalist" party that advocates for an unitarian government for the place. They're a sort of fourth or fifth party in Boston, to be honest.

Movement for A Special Silliness for All Citizens Here - United Sunshinist Enterprise - Totally Time for Silly!
A party with a long and incomprehensible name that more or less describes it. It's often just called the "Massachusetts Party" [this tends to be the "official name" people retort to], or even more commonly "the Silly Party" [in common parlance]. It's the Massachusetts affiliate to the Sunshine Lollipop Party, and more or less is their branch there, really. They won a couple of Boston seats in local government thanks to anti-politician sentiment.

YOUR Movement - An Alternative for Massachusetts Bay
A part of the federal Your Movement, it has achieved some success at a local level, but hopes of entering Parliament proved just that.

State parties that only run at a federal level.

Pinetree Liberal Party
Claims to be the federal Whig Party's Massachusetts branch [the federal party declines to comment] and advocates classical-liberalism, in contrast with the LDP's general left-liberalism.

Like all of New England, the Republic of Massachusetts Bay is divided into towns. New England towns include rural areas as well as population centers and serve as the basic unit of local government. Smaller towns still govern themselves via the direct democracy of the Town Meeting, a legacy straight from puritan days. Larger towns and cities have more typical representative governments.

Boston, the biggest city by far, is a special case. By the late 1800s urbanization had spread well past its municipal boundaries. In our timeline Boston annexed the surrounding towns. In this timeline, the solution was regional cooperation. The towns kept their names and their borders, but most of the machinery of local government was merged into the General Urban Government of Metropolitan Boston... generally, the large agglomeration is usually just called "Boston," while the city proper is termed "City of Boston".  Greater Boston expanded to include eight towns besides the City of Boston itself. Their town councils now sit together as a single body, and a single mayor administers the consolidated unit like one city. Since the 1980s or 90s, some power has devolved back to the individual towns in Boston, part of a broad national trend toward more local control. The individual town councils once again meet regularly, though they still spend much more of their time in the full General Council; and each town also now has a Deputy Mayor elected by the community.

The Praying Towns of the 17th century have a special status. They were important vessels of Indian culture in Massachusetts Bay.  These were places, where Indian converts to Congregationalism were gathered and closely supervised by English clergymen.  While most of the Indian nations in southern New England lost their land, the Praying Towns survived and became an important part of the cultural mix in the colony. Around twenty were founded, mostly in the central part of the state. They allowed their residents a measure of autonomy and dignity in a New England environment that was otherwise incredibly cruel: many other Indians were either driven out of the state, or resettled in what we must call concentration camps on islands in the bay. Most fled for Canada, the Vineyards, or Allegheny, though some converted and joined the Praying Indians. At the time of independence, England concerned itself with the rights of the Praying Indians, and the Treaty of the Hague enshrined their rights.

​Over time the Praying Towns shed their puritanical structure, but they kept their autonomy and their communal form of land ownership.  Yankee settlers in the west used them as a model for regulating Indian towns in the places where they created new communities: especially in Upper Connecticut, but also in parts of the Upper Country and Ohio where many Yankees settled.  Most of the towns are bilingual, with traditional languages under threat from English.  The oldest and largest is the mixed English-Massachusett town of Natick, a few miles southwest of Boston.

From early superstitions and tales of witch burnings, to modern stories of horrors rising from the sea, Massachusetts Bay is known for its "spooky" culture, especially the north shore of the bay.

The state has a flag based on the earlier flag of New England, but the cross of St. George has been removed, and English red given way to republican blue. 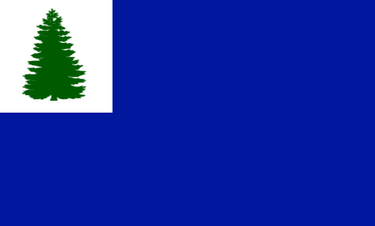