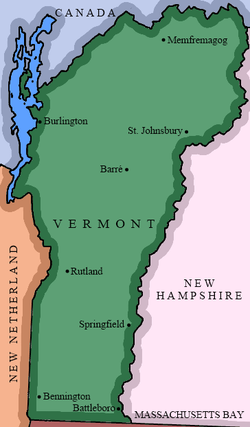 The English settlements of Vermont began when the colony of New Hampshire illegally gave grants to settle in Dutch territory to some of its citizens and to some bands of Abenaki.[*1] In a classic divergence of interests, the English government refused to support the settlers, who spent decades fighting off Dutch officials on their own in a slow-paced conflict that was a constant threat to Anglo-Dutch relations.

In the 1760s, the conflict came to a head. England acknowledged Dutch control of the land west of the Connecticut River, in effect disowning the Vermonters. The settlers formed a militia, the Green Mountain Boys, and then a republican government. This was probably a bluff meant to force Britain to re-assess the situation, but it drew the attention of French Canada. The French welcomed any disunity among their English rivals and were at the same moment stirring up trouble between Virginians and Pennsylvanians in the Ohio country.[*2] The Canadian governor extended recognition and friendship to the new republic, and after that there was really no going back. Vermont had to fight both England and its neighbors in the Wars of Independence, confirming its separate status for all of North America.

Vermont is often compared with Upper Connecticut and Watauga, all small English-speaking states that began as independent settlement projects without support from the mother country. Its tradition of stubborn self-reliance is considered the "north pole" of the quintessence of New English culture; the "south pole" is represented by the Vineyards with their history of tolerance, sensible compromise, and a nautical tradition.

The state's commitment to republican egalitarianism is reflected in its constitutional structure. Care is taken to limit power at every level. Legislators are elected to one-year terms, and the President has a term of only two years. The power of the executive is weaker than in a typical presidential system, and the House of Representatives possesses considerable checks on the president's power. The state itself has to contend with the strong township governments typical of New England. The towns have surrendered some of their power to the state over the years, but retain considerable home rule rights. The independence of the towns led to the most singular feature of Vermont government, its "wandering capital." Every twenty years, the House of Representatives is required to vote on a new location for the capital. The President, Council, Supreme Court, and House of Representatives are then required to relocate to the new town at the start of the next legislative session. Government agencies and offices generally do not move, and the result is that the state bureaucracy is scattered among various towns across Vermont. The republic's small size and lack of an urban center make this possible.

The state is known as the birthplace of the Mormon religion.  The revelations that form the basis of the faith occurred here in some of the valley towns near the Connecticut, and it was here and in northern New Hampshire where the original Mormon congregations were founded among the hardy, mobile, frontier-dwelling Yankee population.  The scattered congregations were eventually drawn together to a new site in Upper Connecticut.  Lake Erie was briefly the center of the religion until persecution led the community to relocate to the Missouri valley in Upper Louisiana and the surrounding area.

Today Vermont, like the rest of New England, is mostly English-speaking; but the southwest around Bennington has become largely Dutch, while the northern borderland has many French speakers from Canada. Memfremagog is about 50%-50% French and English. The Abenaki language has not fared particularly well here, since they intermarried with the English and their children largely abandoned the Indian language; but some important pockets remain. St. Johnsbury in particular is known for its Abenaki culture; most road signs and shops in town are bilingual.

[*1] In the world of the ASB, it would be madness for settlers to begin a project without bringing along some friendly Indians. Without them they couldn't hope to defend a wide area by themselves, and the Indians' family connections in nearby villages would help them smooth over conflicts with their neighbors.
[*2] Another feature of the ASB is the intense rivalry among the English-speaking colonies. Today, descendants of those colonists identify as different ethnic groups, usually called "stocks," the most prominent of which are Yankee, Pennamite, Virginian, and Carolian. Those identities to an English speaker are at least as important as the distinctions between Canadiens, Adadiens, and Métis to a French speaker. 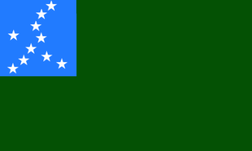 The flag of the Republic dates to the days following the Revolution, when hope was high that the newly independent English-speaking states would form a confederation together. The project to unite them never got off the ground due to the competing interests of the various states; in the end they were to unite, but as members of a larger confederation that included the French, Dutch, Indians, and others of the continent. There were many flags of the era that used stars to represent the independent states. Vermont's has ten, the maximum number of states that could potentially have joined a "confederation of the republics". The stars are arranged as Cygnus, the Swan, a northern constellation meant to symbolize the nobility of citizenship.