The Free State of Upper Connecticut 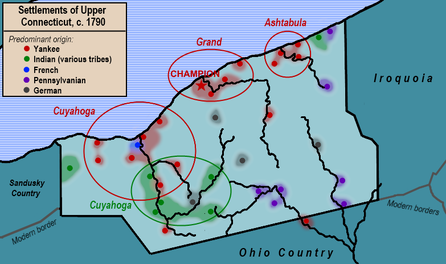 In the 1640s the colony of Connecticut bought a big portion of the land belonging to Saybrook colony,  including its claims to vast lands west of the Alleghenies. For more than a century Connecticut made no attempt to do anything about this claim. But after 1770, with the coming of Independence, many of the newly independent English states began seeking to expand westward. Connecticut joined the War of Independence in 1769 when the colony renounced the king and declared for the Republican cause. Immediately it sought to make good on its western claims.

Connecticut claimed a strip of land that crossed the entire continent, but it focused its colonization on two regions. The first, the Wyoming valley, was in a region surrounded by stronger powers: Pennsylvania, New Netherland, and Iroquoia. The presence of these three so close to the territory all but guaranteed that Connecticut would never be able to win sovereignty over the Wyoming Valley region. But the settlement project of Connecticuters was nonetheless impressive. The main town, Wilkes-Barre, eventually became the capital when the rival settlements were united into the state of Poutaxia.

The second area of focus for Connecticut was even further west on the shore of Lake Erie. The first plan was to capture the English fort on Sanduskey Bay to use that as the nucleus of a new colony. An expedition was launched to parallel the Virginia campaign along the Ohio River. Connecticut forces under Israel Putnam crossed the mountains and reached the Cuyahoga, where they concluded an alliance with the Indian republic based there. When they reached the English post at Sanduskey, the soldiers and traders there, seeing that they were badly outnumbered, abandoned the fort and established new positions on Garrison Island and the Marblehead peninsula. The Connecticuters took over the fort and began work on a new one. The campaign succeeded in drawing many allied Cuyahoga Indians to the region, but it failed to  the main objective of clearing the bay of English presence.

However, the campaign opened up an area of settlement to the east of Sanduskey. The state chartered a land company to begin selling plots to people who wanted to farm land along the Cuyahoga, Grand, and Ashtabula Rivers. Groups of families began to carve out townships and begin planting. These settlers were a hardy bunch of no-nonsense Connecticuters. They had to be: they were heading into a region contested among several empires and Indian factions, where warfare for land, fur and revenge was still a contant fact of life. The newcomers drew up articles to pattern their government and mutual defense. The name of their capital, Champion, came from the surname of its founder, but it also nicely reflected their aspirations.  Connecticut could only hope that its far-flung colonists would be able to wait out the storm.

As the first war of independence drifted to a halt, many of the English states were giving up their more extravagant western claims in the interest of continental harmony. For example, Pennsylvania dropped its western land claims to focus exclusively on trade, while the little group of Massachusetts settlements on the north shore of Lake Erie accepted the protection of French Canada. But small, ambitious Connecticut stood firm. The newly independent state refused to give up its territory on the south shore of Lake Erie.

The end of the war reduced the scale of violence but did not end it. Disputes over land and policy broke out between the new settlers and the Indians of the Cuyahoga; the defection and emigration of many of the villagers hurt the ability of the settlers to defend the area. There were also conflicts with pro-English villages throughout the region.

Political squabbles between the new states of Connecticut and Massachusetts also made an impact in the west. The Lake Erie Connecticuters greatly resented Massachusetts' desire to assert dominance over its smaller neighbors - but they were shocked at the way that the Connecticut legislature decided to resist. In 1781, Connecticut momentously voted to go back to England, accepting the offer of autonomy within a restored Dominion of New England. Most of the Lake Erie settlers were anything but loyalists. They opposed the restoration and some began to whisper of a second revolution to break free of Connecticut and England, But for now, Upper Connecticut did not have the size or strength to survive as an independent state.

The new government encouraged western migration to strengthen its control of Lake Erie. One of the largest settlement projects was the Sanduskey Bay area, where Loyalists from Connecticut and Saybrook built many new towns. In the towns east of Sanduskey, pro-Crown state officials struggled to work with local leaders sympathetic to republicanism.

The Ohio and Great Lakes regions erupted in warfare again in 1802. The war was part of the global struggle between England and revolutionary France. In America, the spark was an alliance between the French government of Canada and the state of Virginia - the so-called League of St. Joseph. This alliance threatened the independence of other players in the region. The Lakes were a major front in the ensuing war. English and French ships fought on Lakes Erie, Michigan, and Huron in the largest naval battles in the history of the inland seas. Troops from England and New England were stationed in many of the towns of Upper Connecticut and prevented any major land attacks there.

The outcome of the war was good for the inland peoples of the continent. It resulted in a neutral Ohio and a demilitarized Upper Country. In Upper Connecticut, the war's legacy was mixed. On the one hand, many people felt gratitude to England for defending the area from Virginian, Massachusetts, and French forces. On the other hand, there was an undercurrent of resentment at the military presence. Some argued that Upper Connecticut could have avoided the war entirely if it had remained independent.

In the environment after the war, the province of Connecticut had to accept the Lake Erie people's demand for an autononomous regional government. Within a few years, the region was elevated to a province, and Connecticut was formally divided into Upper and Lower. Within a few years, the enduring republican sentiment of the state returned to the fore. Upper Connecticut had cut its real political connections with the King and with Connecticut, leaving only enduring symbolic and sentimental links.  Yankees continued to immigrate to Upper Connecticut, but it was no longer a part of the Dominion.

Upper Connecticut eventually was accepted by its neighbors and won an equal place alongside the colonies and Indian powers. The hardworking pioneering spirit of the early days can still be seen in the state's energetic and lively heavy industry. 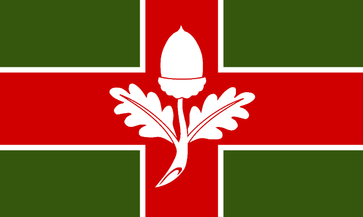 Lower Connecticut's flag features the Charter Oak. The grapevine symbol that we know remained with the state of Saybrook. Upper Connecticut could therefore choose no symbol more fitting than an acorn: a new shoot of the Oak planted in the west. Early versions of the flag featured crude acorns on plain fields, or on English or Union flags. The modern form was  established in the early 19th century. The Cross of St. George makes an appearance; it represents links with New England as much as with Old England, indicating the origin and culture of the mainly English inhabitants. The green, white, and red come from regimental colors of the early militia. 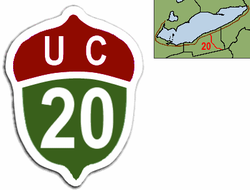 State highways in Upper Connecticut are marked with the acorn symbol.  This sign is for State Route 20; this feeds into the South Lake Erie Turnpike, a toll road operated jointly with the neighboring states of Iroquoia and the Upper Country. South of  the state border it goes to Deux Forts (Pittsburgh), where it feeds into the Great Northeast Trace, one of the great national highways that from Port-de-Galvez to Niagara.