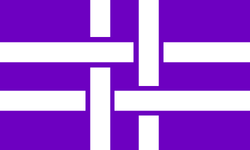 Poutaxia takes its name from the Delaware River. The Lenape call Delaware Bay the Poutaxat, and the name was easily transferred to the river. The English use both names; the Dutch likewise call it both the Poutaxat and the South River. In English the state's name gets palatalized: "Putaksha."

Poutaxia's flag represents interweaving belts of wampum, a symbol of the alliance of different White, Indian, and Mixed peoples who created the state. The number four is sometimes said to represent the four states that once claimed land in Poutaxia (NN, Iroquoia, Pennsylvania, and Connecticut), but originally the design was simply geometrical. 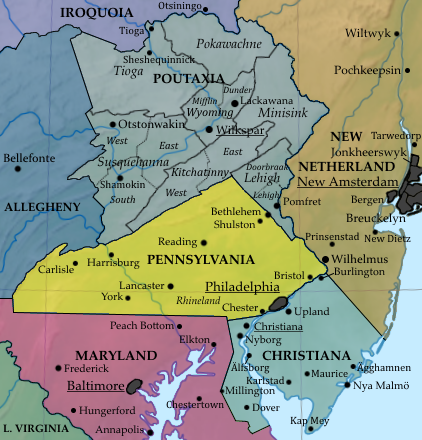 In the 18th century the Poutaxat valley was a neutral ground between three strong regional powers: Pennsylvania, New Netherland, and Iroquoia. Besides people from those three places, Lenape, Shawnee, Susquehannock, Germans, and Yankees inhabited settlements scattered across the area. These diverse groups co-existed or fought as the situation called for.

In the 1780s and 90s a new class of Mixed local merchants, at the same time White and Indian, were emerging as the key local leaders. They were beginning to organize governments on the basis of the regions that later became Poutaxia's provinces. In some areas, local leaders were more or less beholden to one state. So the Wyoming Valley settlements were dependent on support from Connecticut; Pennamite loyalists were predominant in Kitchatinny; Tioga had treaties with the Iroquois. Other provinces were more fully independent, though neighboring states meddled in them. Pennsylvania and New Netherland had forts in Lehigh, Susquehanna province had influence from all four states, plus Maryland and Christiana.

The Anglo-American Congresses of the 1780s established relations between the English-speaking states and what were called "the settlements west of the Poutaxat". The Congresses helped to refine the emerging class of local leaders, giving them experience in continental politics and diplomacy. Agreements reached in Congress began to define the region's borders. When the Anglo-American Congress merged with the Iroquois-Dutch Covenant Chain in 1795, it cleared the way for all of the regional powers to reach an agreement on Poutaxia's status.

In 1798, the assembled allies in Congress agreed that Poutaxia ought to become a neutral, independent state. Local chiefs and notables met in the town of Wilks-Barré, modern Wilkspar. They created something which they called the "State of Poutaxia", though for the time being the state government was nearly nonexistent: it was little more than a large committee for choosing and giving instructions to the provinces' delegation to the Congress. Still, all of Poutaxia's neighbors agreed to call it a state and recognize it as such. It was therefore the first of the "neutral ground" states created in the spaces where colonial influence overlapped; the arrangements that created it would be applied after the creation of the ASB in Allegheny, Ohio, West Florida, and other states.

In the wars of the first decade of the 1800s, all of Poutaxia's immediate neighbors fought on the same side, that of England, and so the state did not see much major fighting. There were some skirmishes on the western edge. Virginia, which fought on the other side, actively tried to win over some of the Poutaxat towns and provinces, but succeeded only in drawing a few recruits. The surrounding states also raised militia units in Poutaxia; most of these went north to fight in the bloody Lake Erie theater of the war.

But the war also spurred the new state government to organize Poutaxia's defense. It oversaw the construction of forts and blockhouses. These had to be manned and provisioned, and the garrisons had to be trained and fed. This required money, which required statewide taxes, largely in the form of contributions from the seven provinces.

Among Poutaxia's emerging elite, the opinion was emerging that the state should adopt a proper government that could put it on equal terms with its neighbors. The constitution that they put forward in the 1820s was a fairly radical change: it centralized most of the sovereign power, leaving the provinces as local administrative units and little more. Poutaxia became a state in fact as well as in name.

Neighboring states (Pennsylvania, New Netherland, Lower Connecticut, and Iroquoia) still had forts and other properties in several provinces. They operated roads and bridges and charged tolls for their maintenance. This legacy of Poutaxia's history remained in place for almost half a century after the adoption of the first modern constitution. The modern idea that all of the states are fundamentally equal had not yet come into being. It was only after the rise of the confederal Parliament that laws were passed to prevent stronger states from meddling in the affairs of weaker states.

In the 1870s, all sides finally reached an agreement to make Poutaxia a state coequal with the rest of the Confederation. The State of Poutaxia took control of all assets which had belonged to other states.With this hurdle cleared, the state embarked on a series of reforms to make local government more efficient. The larger and more populated of the seven provinces were broken up into counties. In the 1950s the provincial governments were abolished completely, all powers of local administration passing to the counties. Provincial names and boundaries were kept only as a geographic convenience; they mark out not only physical features, but major features of the state's human geography as well.

Poutaxia from the start was poorer than its neighbors. Coal and oil brought boom times to the state in the late 1800s, but like other industrial areas the state today struggles economically. It still remains the largest source of anthracite coal on the continent. The state's history bestowed a diverse population, and the topography ensured that many isolated communities would keep their uniqueness. In parts of the state it seems like every valley speaks a different language. For example, Poutaxia is the home of the only community to still speak Pennsylvania Welsh. The community's ancestors settled the Welsh Barony, a tract of land just west of Philadelphia. Welsh died out there long ago but continues to be spoken in a valley where settlers from the tract founded a string of settlements.
​