​The State of Bermuda 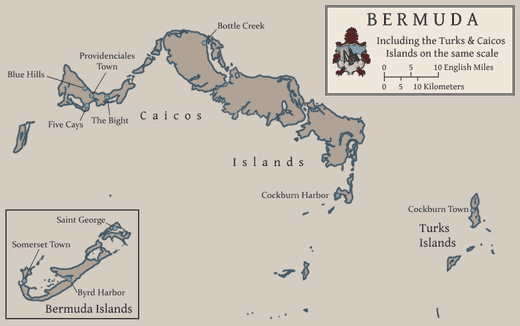 Bermuda is one of the oldest English colonies in the hemisphere. It was founded by the survivors of an English shipwreck in 1609. They were the first humans to ever live on Bermuda, though the Spanish explorer Bermudez, source of the islands' name, had visited a century earlier. He had left behind a population of pigs for the benefit of any future marooned sailors. These pigs' descendants would save the lives not only of the survivors of 1609, but of the starving inhabitants of Jamestown, Virginia, as well.

From 1612 Bermuda was part of the Virginia colony, but its great distance meant that Bermuda had a great deal of autonomy; it had its own governor and legislature and functioned as a very loose dependency of Virginia.  Bermudans played an important role in the early settlement of the Bahamas and Carolina.  Bermudan salt merchants also gained effective control over the Turks and Caicos Islands.  When the Bahamas broke away from both Virginia and England in the early 1700s, supporting the Jacobite claimant to the throne, a long dispute began over the Turks and Caicos.

Bermuda declared its independence from England along with Virginia toward the end of the 18th century. It was a fairly easy task for the Royal Navy to reoccupy Bermuda.  But in the negotiations that followed, Bermuda became a major sticking point.  Virginia (negotiating together with Massachusetts and New Hampshire) insisted that English forces relinquish its island territory.  Since these demands were unenforceable given the Virginia's lack of any navy, Bermuda stayed in the Empire; but Virginia never gave up on its claim.  The treaties signed at the end of the Wars of Independence were partial and inconclusive, and Virginia continued to hold out hope of recovering the islands.

In Bermuda, an active anti-monarchy Whig movement dominated the assembly and defied the governor's authority. The assembly was frequently prorogued by the governor but managed to extract some important concessions, including his tacit approval to send delegates to the Anglo-American Congress, a body that later merged into the Congress of the Nations.  The Congress had begun as a meeting for coordinating the activities of England's colonies; now that half of its members had left England's empire it continued as a forum for regional diplomacy.

In the first decade of the 1800s, one of the last great rounds of imperial warfare in America, a Virginian expedition joined with local Whigs to oust the royal authorities from power.  Bermuda joined Virginian, Carolian, Cherokee, and Crown representatives at Bath, Virginia, in 1808 to finally negotiate a permanent settlement for England's current and former colonies.  With both southern New England and Carolina remaining loyal to the Crown,  Bermuda was not terribly important, strategically, for England, and it relinquished the islands to Virginia in exchange for a purchase price and a tribute of one sloop a year from Bermuda's lucrative shipyards.

So in the 19th century, Bermuda returned to its earlier status as a self-governing dependency of Virginia. Over the course of the century, the ASB did away with these dependent relationships one by one.  Bermuda was a full and equal member and detached from Virginia before 1900.

The dispute over the Turks and Caicos continued.  Ultimately Congress deferred the question to the nascent Great Council of State, which decided in Bermuda's favor based on two centuries of active use of the islands.  The Turks and Caicos have grown in population thanks to modern tourism, but they still have only around a third of Bermuda's population despite being several times larger.  They were treated as an integral but autonomous region of Bermuda, with their own local assembly but with full representation in the Parliament of Bermuda.

By the 2010s, Turks and Caicos was known as the ASB's "last colony," and the idea of statehood was discussed more and more.  A pro-statehood party won seats in the assemblies of both the Turks and Caicos and Bermuda.  Two non-binding referendums yielded conflicting results, but a corruption scandal in 2011 gave the movement more urgency. The islands sat a local assembly with new autonomous powers in 2016. Two years later, a binding referendum indicated solid support for statehood.  Bermuda and Turks and Caicos agreed to take a year to sort out the details of a separation, which will be completed in the spring of 2019. At that time, Bermuda will become the ASB's smallest state by land area.

Bermuda's flag comes from that of Lower Virginia. That flag has red and blue stripes with a white rattlesnake over all. Virginia's navy once used variant to show greater contrast between the colors: it made the stripes blue and white and moved the rattlesnake to a red canton in the corner. Bermuda, as a seaborne dependency of Virginia, ended up adopting a flag based on this naval variant. In place of a rattlesnake it features a local dangerous creature, the Portuguese man o' war. The man o' war can be found on beaches in many parts of the Atlantic. While it looks like a jellyfish, it is actually a colony of tiny organisms. And as with the rattlesnake, it is unwise to tread on it.